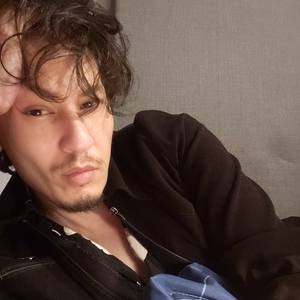 Alan Jordan Lew
Born in Houston, TX 1977
Visual and Auditory artist. Been working with night photography and traditional mixed-media collage for half my life. Stopped night photography when slide film became hard to find. Yet I really cant wait until I can afford a D-SLR. Music composer since 14. Scored a few local films then fell in love with the idea of modernism and the future of classical music. In between had started an eclectically abrasive electronic band called inwex. Being busy is my life and finding a level of joy with such things is necessary. One day I would like to visit Vienna which has been a long dream of mine since childhood. I've lived in Austin, Houston, and West Hollywood. I love good film, showing in galleries, and Mozart.

I started doing visual media during the last year of high school. During that time I had repeated ART 1, for the fourth time in a school for trouble makers. Even piano students rebel. (We're the worst.) I could never pass ART because I didn't care, or cultured enough with visual history. All I cared about was being a great pianist, composer ... cigarettes, friends, playing lead guitar, and nine inch nails. Late 90's ego were also huge. We liked to mope because it felt cool. Ha. Anyway, I managed to pass ART 1 believe it or not. Not much of a choice really. Ended up graduating months earlier. By that time however I was entranced by art. Specifically collage, but I was not familiar with it. We actually didn't do collage work at all.
It was 1996. Months back before graduation 'something' happened to me. Something major. I will say, something beautiful. After this event I began having nightmares, and my mind never felt more clear than it did then. I obsessively cut thin slices of paper, and was afraid of bad luck if my early work wasn't symmetrical.
A thought in the back of my mind came to me. I was hit by a car when I was 13 on the 4th of July. I don't remember any part of it. A few months later I could compose music. I already knew how to improvise badly. It wasn't genius, but it wasn't bad either.
So basically I could be crazy, delusional, and even think my work is a strange twin of myself. Then again, I'm still learning. Perhaps injury when becoming a teenager, and finding a 'certain clarity' in the late teens made me what I am today. I'm not saying I'm a happy person. I hear a lot of artist aren't. Thought the whole idea was arrogant and cliche when I was younger, but it happened. How about that?
This has been my education.
I didn't learn night photography until moving to West Hollywood in mid 1999.

I am now selling an enormous amount of time from my life that created these mixed media pieces. From the first one I ever made to the last one I will ever make.

I have almost every collage I have ever made. A few got sold, a few were commission, and some even lost. I had even refused to sell every time I had gotten an offer. I was going to leave them with my brother and sisters kids to keep my art in the family. Things have changed.

Fill in the Blanks Exhibition: October 14   October 28, 2010 One piece per invited artist.

The Geek Show: August 16th - September 13th 2007 Won "Best of Show" Award for my 3-D sculpture "who's watching you?"
Three invitational works and two other works submitted to be juried - both were accepted. Interviewed for 88.7 KUHF on The Front Row.

The Figurative Show: August 17th - September 14th 2006 No invitational works - submitted two pieces to be juried - both were accepted to be shown.

Hello Again: August 25th - September 22nd 2005 I was one of three people to win the "Best Body of Work" Award. Three invitational works and two others were entered to be juried - both were accepted. (This show was canceled a week short because of Hurricane Rita)