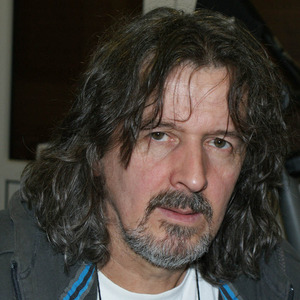 Painting is for me like telling an emotional story about occurrences and people of today.

To tell a tale by mixing emotion and energy with colour, sometimes intentionally trough the simplicity of a cave drawing, that is my recipe. Transformation by walking between realism and abstraction and vice versa, brings the elements to balance. To demonstrate the purity and beauty of the contact between colour and canvas, is my language. I do not want to search throughout the painting process; Id rather explore and think during the preparation. That makes the battle between the canvas and me sincere. The painters urge to make something personal, authentic and original is not the easiest job, but it gives a special emotional charm and fulfilment at a smallest success.

Picasso once said that the artist is a receptacle for emotions that come from all over the place: From the sky, from the earth, from a passing shape, from spiders web. Contemporary artist Slavko Dujics kinetic oeuvre of chromatic paintings is emblematic of this statement by virtue of the organic effusiveness of intense emotion and energy evident in his art. Mr. Dujic paints subject matter, such as the human figure, in a manner which is between figurative and abstract, depicting figures with and amongst frenetic, spiraling cacophony of lines so that the forms are nearly indistinguishable. Mr. Dujic paints with brushstrokes that dribble down, zip up and twirl about canvas, presenting a sense of movement to the subjects and creating general sense of motion to the work. His art has, as Mr. Dujic describes, the simplicity of a cave drawing, communicating through the vigorous line and color in a straight- forward manner that lends the art a pure and universal quality. Mr. Dujic paints is an abundance of effulgent red and rosy hues, marked with splashes of icy blues and dashes of yellow. Black and white. The cool blue color juxtaposed against a background of warm red creates balance to the painting and also the sensation that the canvas is a living entity which has slashing temperatures. Fundamentally, the authenticity of Mr. Dujic,s art radiates from the canvas and one may sense the true emotion put forth, thus leaving the senses and mind refreshed and vitalized.

Of Croatian descent Slavko Dujic has exhibited his art in the Netherlands, Belgium, France, Germany and Italy. Mr Dujic Studied at the Stedelijke Academie voor Schone Kunsten in Belgium, Hasselt, where he specialized in abstract art. Mr. Dujic is member of a professional artists association in Holland.