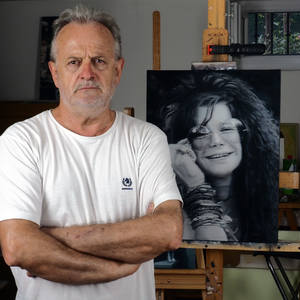 . .. in Richard, absolutely refined painter, it seems that Nature is claiming a consideration of portraiture parity with the human figure, in so far as, in its way of bringing fruit, it is endowed with a vital soul, an inner pulsation that can be defined as a kind of temperamental characteristic. The representations are framed and located within the preset limits of a posing and into a spectacular arrangement. In this theatrical way of painting the plot is imperceptible to the first visual impact, and requires a good training to the decoding of the technical processes to be grasped in its descriptive and structural functions. The tonal relations are obtained with the use of clear and basic dyes, stretched with a slow motion, which allows to distribute on the surface and where from time to time it is necessary, the strength and the tenuous nature of the tract. The calibration of the light, which seems to come from a natural source, does not play much on vibration, as on the ability to reveal the sinuosity evoked by the bright colors and the transparent shadows. The backgrounds are mostly dark or atonal and give contrast and thickness to the volumetric effects. As for the colors, which are also the key performers of the form, if not the prompters of attention to the detail, I suspect they hide the typical anxieties of a certain seventeenth century symbolism, where the fray of a peel, or a slight defect in the ripe plumpness of a fruit have a sense of memento mori

Bruno Richard was born in Rivoli (TO), Italy in 1952 and lives in Orbassano in Via M. Coppino No. 4. He attended the Art School in Turin and the first exhibition of 1973, followed by numerous solo and group exhibitions. It gets so important awards and his work found Thumbs and as many international awards. By experimenting with new techniques and new images of the 90s, in a figurative classical, he exhibited with great success today. Some of his works are part of important private and public collections collections.