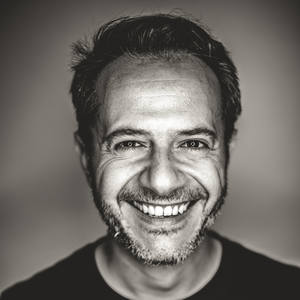 The basics of my artworks can be found in the critical-theoretical and -practical analysis of differing artists like Marcel Duchamps and Barnett Newman – to mention the most important for me – and the art theorist Clement Greenberg.

I´m interested (in general, but also in arts) in overcoming artificial boundaries for the sake of what all humans have in common. This is owed to my experience as a child of immigrants. Differences are subtleties of beings whose differences only can be appreciated if you understand that there are a lot of commonalities shared.
Referred to the arts, it also means that I´m only interested in the media-specifity insofar as to overcome its specifity.

I would call myself an artist as a theorist and/or theorist as an artist.

At the moment, I´m also working on an art theory, in which art is treated like a language, where artists, their artworks ("Artworks as arguments") and their recipients are in a dialogue and in which all are part of "art language games" that are meant to be thought of in a Wittgensteinian way.

I currently live and work in Frankfurt/Main.

I graduated in Philosophy, History of Arts and Psychoanalysis (M.A.) and Business Administration (B.A.).