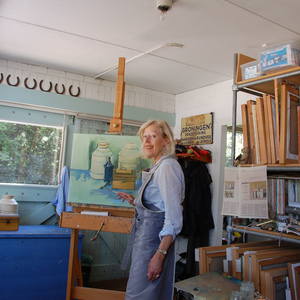 Margreeth, 1951, born in Basel, attended secondary school in Zeist. She received her artistic education in Brussels (one year) and in Amsterdam. She attended the four-year NXI course at the Rietveld Academy there, which granted her teaching competence in creative subjects. She then switched to the Rijksacademie Amsterdam, where she studied for another three years and was taught, among other things, in Monumental Art by Harry Op de Laak.

Residing in Friesland, the series of paintings of cows, horses and skutsjes, which she has made in recent years, was therefore a logical extension of her subjects.

Her style of work can best be described as realistic figurative, without striving for a photographic realism. Details are therefore not important to her, but the more so is the color, the shape and the light. These latter elements therefore strongly determine the atmosphere in her paintings.
The painter has set herself the goal of rendering things realistically with as few means as possible, that is to say with rough brush strokes and large surfaces. Less is not