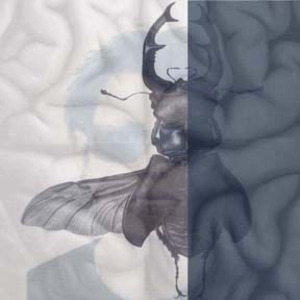 born in Hall in Tyrol.
lives and works in Vienna and Tyrol.
Martina Tscherni’s drawings unfold around her impressive, 20 meters-long “scetchbooks” – paper rolls covered with drawings. The paper rolls are the starting point for her artistic work, they reveal the themes and subjects of Martina Tscherni’s art, illuminate the detailed, meticulous way of her drawings and are the source and initial points for her drawings on paper, the visual storyboards and animation films and even stretched further, her drawings with yarn and thread.
Martina Tscherni has dedicated herself to a graphic account of natural organisms and organic microstructures. Stating in person she is a passionate drawer and her paper rolls – with a length up to 20 meters permanently filled with drawings – a kind of sketchbook. Thereby she sets off quite laid-back. And doesn’t know the modernistic fear and panic facing a blank sheet, on which the ultimate masterpiece has to be placed. She starts drawing like going on a long journey, full of relish, step by step, feeling to face a lot of time and space.
Martina Tscherni finds her motifs for all her drawings in nature: they weave together anatomically correct illustrations of brain convolutions, the ever-recurring stag beetles, extreme magnifications of microscopic life forms, and powerful mountain silhouettes. Objects are joined together on the paper by apparently errant lines made of delicate points, extending over the picture surface like a net. Martina Tscherni is transferring, translating, visualizing. In her meticulous drawings she uncovers bryozoans, calcareous sponges, algae - all organisms not visible to the naked eye - giving shape and outlines to them. Being fascinated by them she mostly uses illustrations of micrographs, you can find in natural scientific books from the 19th century.
For the animation movies Martina Tscherni uses several layers of style - the far eastern tradition of role models and paper rolls as the oldest form of graphic illustration and even further, the most ancient carrier of information carrier -, as well as the graphic depiction of organic and herbal microorganisms common in natural sciences of the 19th century. In slow motion subtle sketches of textures of algae and other shapes are scrolling across the screen backed by scientific microscopic pictures. While it takes a lot of time for the accurate sketches, the recipient soon perceives eagerness. Subtle transformations are illustrated by slow movement; a chronological sequence is reproducing itself, like a sequence being indicated by deglaciation only representing a different dimension of time.
Being unable to cope with the gigantic and never ending rush of objects, which want to be illustrated, she allows herself the luxury of limitation. Some shapes are entirely carried out, provided with graphic extras, others remain pale and previously get stuck in manifestation. By means of Martina Tscherni’s graphic attention the pictured organisms get a kind of individuality and become repeatedly appearing protagonists of her „sketchbook“. Martina Tscherni releases her shapes in the plot, grants them enough space to show up, guides them to a well done composition, lets them fly, dance, but first of all she relieved them from their constraint of scientific driven illustration. Now, becoming art, they are building a connection between art and science, between the evident and the inconspicuous and are unfolding their beauty and their mysteriousness in a completely different way.