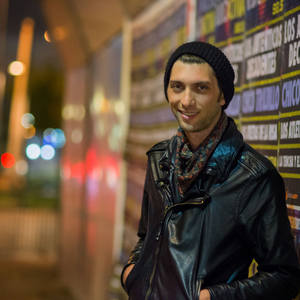 Pablo Martínez was born the 18 of January of 1986 in Montevideo, Ururguay.
Active member of CON ARTIST Collective in New York City.
He studied at the Uruguayan Fine Arts School for 2 years when he decided to move to Europe.
In his return to South America decides to continue his art career in Santiago, Chile. where he lived for 3 years.
In Chile he has participated in many solo and group exhibitions always supported by the Uruguayan Embassy, included "Solsticio de Verano" an art exhibition where he was chosen to represent Uruguay at the event.
Moving from Montevideo to New York he participated in many exhibitions at Conartist Collective Gallery and Greenpoint Gallery in New York City.
In September of 2016 he participate at the art residency of the organization Arts, letter and Number in Averil Park, New York. directed by the prestigious architect David Gersten professor at the Cooper Union Architecture and design University in New York City.


2017 - Installation at Arts, letters and numbers facilities. Project funded and Declared of Cultural Interest by the Uruguayan government.

2018- Solo exhibition at Casa Fugaz, Lima, Peru. exhibition organized by the Uruguayan Embassy in Peru. With the support of the Ministry of Education and Culture of Uruguay.