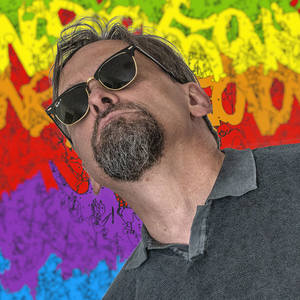 WHY SEMAJ ? AS ARTIST’S NAME
The latter is to be James in back slang, in memory to James JOYCE, this writer and Irish poet who aintained sulphurous exchanges with the one who was going to become his wife, Nora.
Semaj also finds his foundations in the following approaches :
- in the australian slang, Semaj means "fuck", in every sense of the word mean,
- the number corresponding to this first name is 3, synonym for stability but also symbolism of 3 points determining a plan,
- his interpretation is "creative", "sociable", "curious" and "joyful".

We were all born artists. Only certain of us chose to experiment this facet of their individual. Semaj, draws and expresses himself by the image since youngest sound age. His parents, evolving in the Education, allowed him to attend course of music and drawing, very early. But Semaj did not adhere to it because he does not wish that a third person, or any established structure, teaches to him to think. He always decided
to go off to explore techniques and materials, to leave his ideas and his desires to express himself freely.
Semaj was always inspired by the human being, his prohibitions (imposed or not), his corporeity, his interactions with his fellow men, the pleasures and the satisfactions of the life. What awakens its art is always closely linked to the relations between individuals, essentially themes bound to the senses, that they are expressions of satisfactions or still pains (sensations closely linked and inseparable).
We cannot say that Semaj is influenced by an artist, a school or a movement in particular. He is certain that any new work finds its roots in a past artistic expression. It is the mixture of the set of the made
discoveries that are of use to Semaj of compost to give life to his art.
The art of Semaj is profoundly anchored in its life, it is vital for him. He participates to his "meaning balance". Personal exhibitions (France, Germany and Switzerland) found date before the birth of his daughter.
Then, while continuing his art, he also turned to a more stable activity in the environment of the communication in the sector of the medical biology, to meet the education of the latter. Today, his art becomes again
essential, otherwise the main part.
For Semaj, the main part in art, is that it can find his public, whether he is a detractor or that he adheres to it. The important remains to create emotions, feelings, reactions. But before any, to bring the art lover, whether he is a novice or experimented, towards a personal questioning bound to his route of life, to his experiences, to his desires, to his fantasies …
In this way we cannot say that a work of Semaj is more remarkable than an other one, because it is closely linked to his public, to felt sound. A work becomes remarkable from moment or it manages to introduce an
interrogation at his spectator.
Semaj rest was very attached to the individual, to the exchanges, but what speaks to him most, they are prohibitions. Not only those who are imposed by societies or religions, but prohibitions that each of us let us stand out ourself. It is this fabulous confrontation between our desires, our fantasies and our famous prohibitions, that awakens in us this imbalance of felt which Semaj wishes to highlight with its works, by trying to introduce to public this questioning which remains in purpose very personal.
Techniques and used materials are highly varied, mixing the photography, the digital art, the acrylic, the collage, on diverse supports, such as the corrugated cardboard and the aluminum. These supports, beyond the restored image, also present a materiality close to the imprint, as if its wish was to mark the spirits.
The used images are, if they are not extracted from the press, realized by Semaj himself. This allows him to go to the closest to the questioning which he wishes to introduce, by integrating it his felt staff.