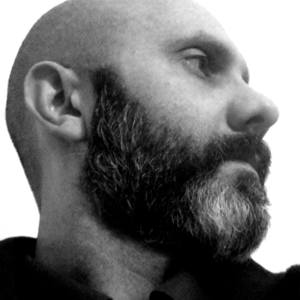 Flavio Biagi, born in 1973 in San Pietro in Casale BO, in 1989 obtained the title of author and composer S.I.A.E. and begins the artistic partnership with his brother Valerio, with whom he founded the electro-pop group Effetto Joule. After the self-production of some demo-tapes, in 1989 an Italian label recorded their first disc on vinyl, entitled Robespierre. The artistic partnership of the Biagi brothers will continue with other musical projects.
In the meantime, Flavio conducts humanistic studies and in 2002 he graduated in Philosophy. Parallel to his musical and university career, his passion for the figurative arts develops. He will learn the various techniques of drawing and painting at the School of Crafts of the Cento-Pieve area, under the direction of the masters Nicola and Matteo Nannini, and the rudiments of digital graphics at the specialized Cappellari Institute in Ferrara. In 2003 he began collaborating with various fashion studios, as a stylistic graphic designer, in the creation of clothing and collectibles for well-known national and international brands.
In 2006 his first exhibition opportunities presented themselves. In 2007 the far-sighted singer-songwriter Vasco Brondi, of Le Luci della Centrale Elettrica, will invite him to exhibit the paintings in his highly original venue in Ferrara. In 2012, the Municipality of San Giorgio di Piano commissioned his first solo exhibition, entitled Mechanisms of corrosion. In 2013, Rizzoli Editore Milano, as part of the series edited by Paolo Mieli, published The End of Culture, an essay by the famous British historian and writer Eric Hobsbawm. For the cover image, a work by Biagi will be chosen, entitled Barbacani, from 2007. In 2014 he exhibited at the Venice Arsenal, with the painting Metaldehyde, one of the finalists of the eighth international competition dedicated to visual arts: Art Award Lagoon. In the same year he participated in Art City Withe Night in collaboration with Arte Fiera Bologna - at Caffè della Corte, in Corte Isolani in Bologna. In 2015 he exhibited at the Cloister Madonna dell’Orto in Venice, with the painting Thymet, one of the finalist painters at the Giuseppe Gambino International Painting Award.
In 2015, two decades after the pseudo-dissolution of Effetto Joule, Mannequin Records, a Berlin record company, reissued the Italian-dance song Robespierre, excellently remixed by the well-known Danish DJ Flemming Dalum. It follows a series of prestigious record publications. In 2016 the Spanish label Domestica Records included Mechanika, an old EJ song from 1990, in an electronic music compilation. In the same period, the US Label Medical Records produces an album of unreleased pieces by Effetto Joule on vinyl disc: Mechanic Soldier. The songs will be remastered from the original 80s / 90s tapes by artist Martin Bowes, at the Cage Studios, England. Transvision 3 was chosen for the cover image of the album. Thanks to this last collaboration, in 2016, the Tiziana Severi Contemporary Art Gallery counts Biagi among the artists for the realization of a collective of well-known Emilian artists C9 Land Emilia - art at court in September, curated by Francesca Baboni and Stefano Taddei. In the same year Manufactured Desire Records, yet another Spanish label, released a new collection of EJ's unreleased records on vinyl. The title of the album is Habt Keine Angst. For the cover images, Sebastiano with wrapper from 2015 and Anteros from 2013 are chosen. In 2018 the record label Manufactured Desire Records on the occasion of the thirtieth anniversary of the first EJ record release, publishes Disaster / Faraway, a 45 rpm on transparent vinyl with two new songs of the group.
In 2016 he exhibited at the collective Men in the city - Traces of humanism in urbanized society - at the Independent Artists Art Gallery, in Busto Garolfo (MI), while in Ferrara he participated in the Sebastiano Ferrarese collective, curated by Lucio Scardino...
The biography continues on the site www.flaviobiagi.it

During my adolescence I lived in front of the Chimiren plant, a chemical industry located in the countryside of Ferrara, in full swing in the early 80s.
After collecting photographs and documentary material on the factory, I set up a strictly didactic project of industrial archeology, which could evoke images of a certain working reality. Later I had the need to graphically represent those places, starting from the latent memory present in my mind.
My paintings reproduce an industrial microcosm, in which I found myself, almost like a sort of exile from the rest of the world. At the same time I grew up preserved from a dynamic-work context, made up of positive human relationships and full of exemplary moral values.

Dino Buzzati, in his famous story, improperly uses the term Barbican, indicating an industrial glimpse. This word, which originally means fortification of fortresses and castles, becomes synonymous with a factory, an industrial structure. I decided to take possession of this name and define Barbacani my paintings of factories, where the immense ferrous constructions stand like fortresses and become my protective shield, an impregnable refuge from the outside world and the precariousness of life.
Although the subjects I have chosen are devoid of the human element, the industrial structures represented are not in disuse, in a state of abandonment, but, on the contrary, they pulsate with a vital force that implies the presence of man, his planning and his ingenuity.

"[...] And yet, though nothing could be seen moving, one could perceive under the casing an arcane life that was fermenting."
Dino Buzzati The great portrait

After a careful study on the acidic colors, characteristic of antiparasitic substances and a rigorous geometric reproduction of the shapes, I tried to bring to the canvas scenarios that had long since disappeared (the production plant will cease activity in 1986. Today, after the partial dismantling, the work area has currently been redeveloped). I designed the forms, the landscapes, the construction of an idea and ideals, trying to recompose the frames of a common project, which involved many people, families and a large part of the local population, for a long time.
I have painted my memories so that the mechanism of time can not corrode them.
Flavio Biagi