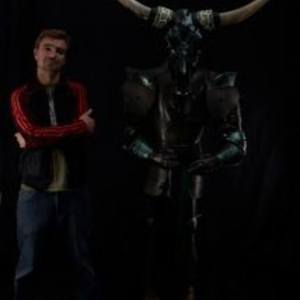 Born in Scotland in 1973, Scott is a much travelled and a careful observer of people, animals, cultures and the vagaries of life and this is reflected in his artwork where he has created an entirely original art form, a celebration of the beauty, power and presence of the beast.

Scott displays an original vision and concept, working with the skulls, antlers and horns of fallen beasts. Through thoughtful observation of the shape and structure, his clever and adroit use of various techniques brings life back to the bare bones and acts as a resurrection of these creatures providing a nobility to the pathos of their naked structure.

Scott’s first enduring passion is music, a talent he still enjoys in its various forms and as a classically trained pianist, his finely tuned ear is matched by the sensitivity and acuity of his vision.

This passion for music, coupled with his exploration of art and design have taken his career through many different guises with commissioned pieces, from One Direction videos to metal videos as well as set design, interior design and magazine TV.

He has been represented by many galleries throughout his career and Scott has also had the honour of presenting his art at the Tower of London and exhibiting on The Strand.

The originality and creativity displayed in Scott’s work has been recognised by a whole host of publications including; Red, Grazia, Period Living magazines, The Guardian, The Times, The Telegraph, The Independent and many more domestic and international publications and blogs.

The list of recognition goes on, with the crowning glory being a heart-warming and funny BBC2 documentary by award winning director Guy Gilbert, which featured the set up of his Brave Boutique company.


Scott’s art represents the beautiful uniqueness and chilling mortality of life on earth and provides highly original pieces for the home with an emphasis on the natural form, colour and texture of the materials that he is working with.

His eclectic style is both spectacular and theatrical, bringing together elements of retro, gothic and boho design to create eye-catching pieces which are guaranteed to turn heads and spawn conversation.

Reading university of art and design