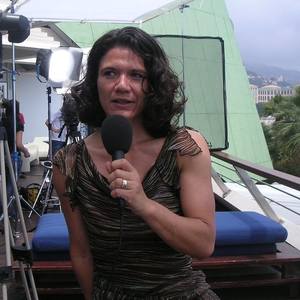 Julia's passion for sculpting began when she was 16 after an accident cut short a holiday from another of her true passions, skiing. She enrolled in the famous Beaux Art academy in France to more fully express what was already an over whelming artistic flair. She decided to move into the three-dimensional world of sculpting.

This dynamic gave Julia the release she needed to allow her artistic ideas to flow. These ideas when suppressed in earlier years were sometimes misunderstood by those around her, who would comment that Julia's introspective behavior perhap's required a quite different therapy.

Her first ever piece "Trois Elephants" was judged 2nd place at an international exhibition in Cannes. She was just 17 years old. From clay she moved into marble, which soon became the stone for which Julia's passion raged. Born in Monaco and growing up in the French Riviera, Julia was able to drive into Italy to hand pick the most beautiful pieces of naturally formed marble to work with. This is what developed her most sought after talent; the ability to take a stone and transform it by using the stones naturally formed, colors, veins and contrasts. Some sculptors have an image or design idea first and then search for a stone to produce their piece from. As well as using this technique for commissions. Julia loves to let the stone speak. This is the talent needed to make unique, original sculptures like " Le Cheval De Gourdon " and is possibly why fewer original sculptures are produced and seen in galleries today.
This innate ability is what identifies Julia's work and distinguishes her as a true artist.

It seemed there was no stopping Julia's passion at this young age. She exhibited in Nice, Paris, Mougin, Cannes, Monaco and needless to say her work was receiving colossal interest.
At a Paris exhibition at the age of only 17, Julia was approached by a gallery owner and artist who offered her a contract to produce exclusively for his galleries, proposing a commission that more mature and better known artists could only dream of. Julia declined, in preference to working as she always had, "independently" with her primary motive being the love of producing her own unique art. Interested buyers were something Julia never had problems with. Her work is enjoyed by individuals the world over in Cannes, Monaco, Palm Beach, Beverly Hills, Paris, and UK.

Julia's independence was cemented in 1994 when she unveiled a three-meter high marble monument in Cannes at a ceremony for over 300 people, including ministerial delegates from around the world. The occasion was Julia's expression towards her wish for world peace and she single handedly organized the event including, sponsors, media, even the granting of a specific cut of soft marble, from within the mountains of Carrara, Italy. The poignant timing of the unveiling was the anniversary of the 1993 Peace Treaty signing in Washington. This paved the way for Julia to replicate the monument in Washington and other major cities of the world.

Even though US approval was granted, alas this marked a temporary suspension in Julia's work. She was prohibited from sculpting, with demands that she complete a degree in Marketing and work for her father in France. This took Julia squarely along a different road, one which has lead to her spending almost 9 years on a path to no where, forbidden even to carry out commission's of significant prestige for some of the world's most influential art collector's.

Finally in 2005 after marrying and still fighting inside with her desire to express herself in every artistic way, she no longer had to live the demands of others. She is now producing in a variety of stone and has recently discovered the beauty of bronze. Collectors of Julia's early work will witness a continued era of excellence. For those who have not had the good fortune yet, it has been worth the wait. Julia is privileged to have one of her 1st new pieces from this restart, by William Koch.