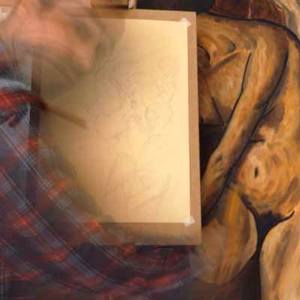 A hard personal experience superimposed on the covid period, which changed my life forever, gave me reason to appreciate even more the strength of color, line and expression.
"The Whole goes beyond Form".
I enjoy expressing myself with different techniques: painting, drawing, photography.
I can imagine that initially the collector or the beholder of my works can be a little crowded out or confused. The hallmark of my work is not found in the repetition of the same technique, again and again, but in some features of the technique itself and. The sign, the theme, the subject... are the way you can recognize my "signature."

Living in Italy, every day I live together archeology, painting, architecture and Roman statuary, the Renaissance, the Baroque and all the other great styles, artistic periods and collections that are here, in Rome and in Italy.

This is in my history, in my roots. In the history and roots of Western art.

I have always felt a fascination for drawing since I was a child. I was fascinated by the idea of translating fantasy stories or even the first knowledge I got in school in images. I remember my notebooks: they were full of stories with drawings and illustrations of what I was learning at school.

This is the way I learned new techniques and I improved my abilities: pencil, charcoal, pen, oil-colours, acrylics, using different styles and painting supports.

I have painted soft and wavy landscapes, which sometimes are rough and separated by plains. I saw these landscapes in Rome as I was a child and they come to my mind in my every day life.

This is the Nature where History traces overlap and they get, in turn, enveloped by Nature. There is a continuous and silent conflict between these two elements.

These conflict, together with Rome and its history, its streets, its ruins and of course its colours is the leit motiv of my work.

These themes are here, at your fingertips. It's present history.

I cannot describe with words what exactly I feel when I'm surrounded by these "strong" landscapes and I try to paint them.

I have completed my knowledge on image studying and acquiring certificates on web design and commercial art and working as a graphic designer.

At the moment I work in the Public Italian School as an Art Teacher.

I took part in many collective exhibits.

My works are in private collections in Italy, Europe, Japan, USA, China, Australia.

I live in Rome and I have got a private studio in my house.


You can contact me for requests, information or commission by email: alessandronesci@hotmail.com

*For the canvas and photo paper edition, the size of the images will be professionally adapted to the proportions of the support, there may be small cuts on the edges, or small edges compared to the image shown here.

Now is available a clothes collection with my art:
http://shopvida.com/collections/alessandro-nesci
https://www.redbubble.com/people/alessandronesci/portfolio

On Saatchiart:
Artist featured by Saatchi Art in a collection

2015 Embassy of the United States of America - 60th Anniversary of the Village UNRRA CASAS, Rome, Italy

2013 ' Storie Di- Segni " Artist's Book Festival , sponsored by the City of Rome, in collaboration with the Libraries of Rome and Zètema Cultural Center, Gabriella Ferri, Rome ;

2012: "Tell us about your Rome", "La Repubblica" newspaper, competition;

2004-2006: Teacher in Drawing and Oil Painting at the New Acropolis Cultural Association, Rome;

2004: " Painters on the Island" , art exhibitions on the Tiber Island , organized for the Roman Summer ;

2004: "You will learn again to be the star", poetry competition organized by the Vice-Presidency of Rome, Department of Youth;

2004: III National Painting Competition "Fondi City", promoted by the Presidency of the Council of the Lazio Region, organized by the Municipality of the Fondi;

2003: "The Palio of the Road", National Competition organized by the Street Festival Novara, Novara, Piedmont Region;