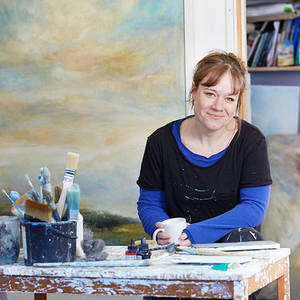 I am inspired by light, land, sky, and weather. The paintings are amalgamations of journeys taken on foot by running and walking. They describe and communicate physical, emotional and visual experiences of landscape. I typically emphasise the sky and remove signs of human habitation. By doing this I hope to offer you space to breathe and be, to be immersed or uplifted, to connect with your own memories of landscape.

The paintings are made using a traditional gesso ground on birch or poplar. I prepare the gesso surface over a number of days. When I am ready to make a painting, I create texture by painting with the gesso and carving into the surface with wire wool, sandpaper and wood carving tools. Next I work with high quality light fast acrylic inks and push the pigment into the surfaces I have created.

Alex has exhibited widely in the UK, working regularly with The Other Art Fair presented by Saatchi Art and with Byard Art. She has work in private collections in France, Germany, Norway, the USA, Japan and the UK.