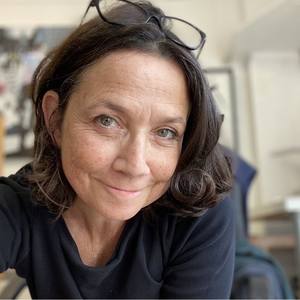 I am a painter living in the UK. I have a studio at West Street Loft in Shoreham, West Sussex.

In the twenty-first century it is always interesting to see a fine artist conflating traditional materials with new technology.  This is the case in the work of Angela Edwards whose prime medium is oil paint on board or canvas and sometimes charcoal on paper, with the methodology of her subject matter coming directly from digital media, such as video, streamed images and often the use of her iPhone.

Angela’s central thesis is connected to a notion of ‘home’, a theme explored from many different perspectives and one she continually returns to.  This ranges from captured images of people returning home from their work environments to the movement of people across continents, namely refugees and asylum seekers – all the representation of people in her work are seeking the solace of home and belonging.


The representation of people moving through defined spaces, also gives focus to the notion, that while we weave in and out of the spaces of our daily life, there is often a lack of consciousness of critical issues that are occurring in the larger world, thus a certain alienation.

This is evident through the digital layering and shadowing  of the images, where the ‘real’ is transformed, into a type of hyper-real, namely, a simulacrum, where a work is not presented as a copy of the ‘real’ but becomes, via the transformed image, a truth in it own right.

I am Artistic director for the new Skyway gallery. Curating and hanging exhibitions.

Through the first round of Saatchi online Places and Spaces showdown 2012.

Represented by the Hicks gallery, London and Kellie Miller, Brighton

The Towner Gallery,Eastbourne, June 2016
As part of a touring charity exhibition

'Metaphysical Objectivity in comparison to realism'
One of 8 artists pick to take part in a group show.
Lloyd Gill Gallery
April 2013

The Dome
Brighton as part of the group exhibition for Bigheartauction