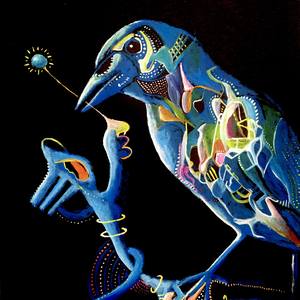 "How did you get into my dream last night?"

Surrealist painter Anton Small (born 1982) works in oil on canvas, and composes pieces which appeal to his inclination for the peculiar and strange. His no-compromise approach drives him to paint subjects that interest him, describing his craft as an alternate language; the finished work, concept, or emotions once painted do not always directly translate into words. Largely inspired by a sense of otherness from artists like Francis Bacon, Frida Kahlo, Yves Tanguy, and Neo Rauch, Anton produces most of his paintings in small sessions over several days; much of it in the late evening and into the night. The surreal entities he creates are an attempt to combine the objectively absurd within elements of the real world. These include the transformation of abstraction into illusionism, furthering Anton’s thesis that there is no clear border between genres— in many cases it can be argued that an abstract painting is at the very least, a realistic representation of itself. Examples of his work include; "Lapideus" describing the magical transformations possible with painting, inspired by a Japanese story of turning stones into goats; "Birth at Midnight" illustrating a cosmic birth of proto-planetary objects symbolizing a new beginning; and "Anthropic" which features a missile commander fastening his seatbelt as a prophylactic for nuclear war. While almost exclusively self taught, Anton’s academic fine art career was supplemented with courses in Frankfurt and at the Kunsthaus Oggersheim.

EXHIBITION WEINGUT EYMANN
My artwork is on display at the wineyard Eymann in Gönnheim (Germany) during Nov.-Dec. 2020