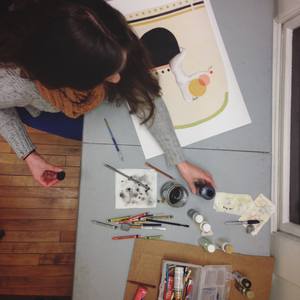 Athena Petra Tasiopoulos is a photographer and mixed media collage artist. She studied photography at the Art Institute of Philadelphia where she graduated at the top of her class in 2008. She currently resides in Vermont. Her work is collected internationally.

Athena describes herself as a collector of second hand images – primarily ‘cabinet card’ portrait photography from the late 19th - early 20th C. From these found photographs, she creates a digital composite by scanning and altering the original photograph to suit her desired composition. While the photo collage serves as the foundation of her work, her limited edition prints are then finished with the application of hand-drawn and painted embellishments in graphite, acrylic, watercolor, and wax pastel.

“My imagination is continuously lured by the mystery of found photographs –piles of 'instant relatives' discarded and forgotten in musty antique stores. It is as if the subjects I select exist in an interesting sort of limbo – simultaneously trapped yet saved within the photograph. I find myself feeling compassion for them. By re-inventing the portrait, I aim to disjoint my subjects from an antiquated identity, allowing them to transcend the constraints of time and place.”