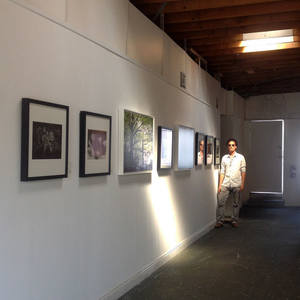 Baghir (the middle name of Nicolas Maslowski) shows us facets of the world of which we never imagined the existence. For him, the perception of life is, in a way, blury.
Baghir, 45 years old, has been experimenting with film photography since the age of eight, when his father (1914-1999), a Russian writer exiled in France, gave him a small camera. This dreamy child, captivated by images, took his camera everywhere. He photographed everything that came into sight, and after years through the lens created some universes. Another passion enthralled him: music. A passion undoubtedly nurtured by his mother (1942-2018), harpsichordist and poetess. After following all art options in highschool, he got an art history licence in University (Paris 1 – Sorbonne Panthéon) while getting hardly caught up by another passion : Geography. He got his Master of Urban & Cultural Geography at University (Paris 1 – Sorbonne Panthéon) in 1998.

As a freelance journalist from 1999 and reggae melomane, he spent time in Jamaica in the early 2000s and befriended artists, many of whom had been forgotten. He founded a label (Makasound/Inna de Yard 2002-2012) and reedited a number of buried masterpieces Nicolas Maslowski’s pictures were often used as visuals for these albums. This label has since become part of a large record company. In 2013, the time had come for Baghir to write another page of his professional story, to achieve his photographic projects.

The artist realized his vision with the work of Numerical perturbations (PN titles for black and white photographies, and PNC for Color ones) after four years of research (2010-2014) and 15000 photographies. His images, quite contemporary, refer to the pictorialist movement in their painterly quality. He works with film and prints on silver gelatin paper, using the traditional process. Named only by number (for exemple PN # 467-736), the blurred photographs retain a sense of mystery in the eyes of the spectator, who often travels far in time and space to a place where freedom from the need for interpretation leads back to the image’s irreducible beauty. The images are a study of pictorial beauty, inspired by painting and black & white and color photography that explore the terra incognita of the photographer’s oneiric world through classical subjects such as trees, landscapes, flowers and feminine models. Influenced by Man Ray or Anselm Kiefer, as much as by Josef Kudelka or Claude Monet, he was also influenced by some contemporay painters such as Nicolas de Stael or Georges Mathieu; Baghir also expresses himself with some totally abscract photographies.

Since the early days of 2018, Baghir has developped a new style mixing his paitings and his photos while he shoots without postproduction. With the help of a glass the subject appears in the painting. He calls this new work Photographic Passports (titles PP # 2704) and does it mostly in color. This work has been shown for the first time in summer 2019 in Paris at Galeri XII and met a real success ; each piece is unique. The exhibition was exported to Beijing before Xmas but was unfortunatly cancelled for Covid19's reasons. His new exhibtion « Undercover » that was suppose to be the 20th of April at 59 Rivoli Gallery in Paris, finally happened in June 2020.

At the same time, Baghir is working on some new PN & PNC, and opening new visions, new perceptions in his « Room », his 7 square meter atelier, as much as on the road all around France.