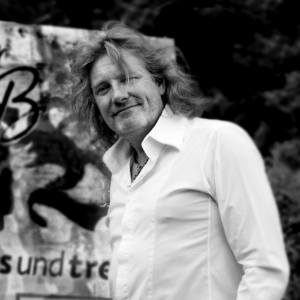 Bernd Luz, based in Germany and Switzerland, became one of the most internationally known Pop-Artists in less than the last 10 years. His works of art can be found in national museums, museums and galleries around the world. He looks back on more than 100 successful solo exhibitions worldwide during the last 6 years. He has designed numerous art calendars and is currently writing his third art book. He is a member of the board of advisors at New York Car Museum.

The color poet with gasoline in his blood dedicates himself with particular passion to scenes from motorsport, which he brings to life with a lot of heart and soul on the canvas. This works of art are a tribute to important vehicles and events that have retained their glamor and fascination to this day. For that he has developed his exceptional media mix technology. He transfers the emblems of our culture that have been photographed and processed on the computer onto the canvas, which is painted by acrylic paint using contemporary solvent painting. And in a further step he accentuates them again and again with painted interventions. This creates a very special effect: a reflection of the past - with the expression, eyes and technology of our time.

Another outstanding facet of his creative work is devoted to abstract art. Between abstract expressionism and influences from expressionism and Pop-Art, he has found also here his very own style. No longer conceptual in nature, the procedure adopted is guided by mood and atmosphere and, instead of a decipherable portrayal of reality, the reality of the image is reflected in a painted form, the mantra being to let the color do the thinking when painting.

His enormous energy literally explodes in shimmering colors passionately on the canvas, while the storm of emotions in the harmony of the color selection is transformed back into a gentle calm.

Bernd Luz is a really creative spirit, versatile and active, he remains true to himself and his innermost concerns: he is about communication, because it connects people - and is not that Art the most beautiful form of communication?

Bernd Luz did his first breath in 1966 in Rottweil/Germany. Already from a young age he was working in oils and acrylics, comics and cartoons. In his youth he made films and won many film awards.

After graduation from High-School he studied photo design in Ravensburg and completed an apprenticeship as a surgical mechanic. Thereafter he studied design at the Constanze University of Applied Sciences, graduating as a designer. For more than 25 years now he runs his own advertising and design agency.

He designed over 600 logos and won a variety of design awards and looks back on many publications in international best design books.

He also gave various lectures, even at an US educational institut.

And so Bernd Luz is completely in the tradition of the great Pop icons. Many of them such as Andy Warhol, Robert Rauschenberg or Jasper Johns originally came from the advertising industry.