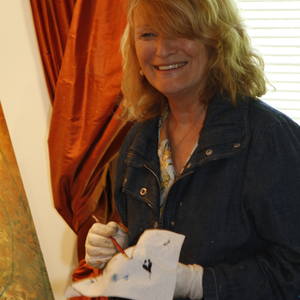 Art is my life. I do it since my childhood and my master degree of art and architecture was a wonderful foundation to find my way. It is so good to have the freedom to paint and build whatever I like to do. Saatchiart gave me the possibility to show the great spectrum of my art. People used to say I am multitask, it is true. I can paint in many styles, as other artists on other fields. I have to fight for my freedom, because in the visual art somebody told for a long time, artist have to paint just in one style., if you change it, it can't be right. I am asking myself why? In all other field it is ok to express yourself on different subjects. Just think about movie directors, writers. I do what I want to do. I live what I do. It's
me.

Academy of Fine Art at Professor Markus Lüpertz.
The foundation of my artist education is the School of Architecture, master degree, including four year special classes for art as figure and landscape drawing, color using, design of form and modeling. Postgraduate education for design, master degree. Several art classes in the US.

Review by Eugen Hwang: Some of Hoffmann's paintings are as rigid and unyielding as math equations. They are sturdy, reliable, and seem almost engineered rather than painted, put together with a welder rather than with a brush. It would be a mistake to think however that Hoffmann's intention is to promote industrialization. Painting would be an unconvincing medium to convey belief in mass production and manufacturing. The lack of any detail that might burden the eye shows that the forms, which lack evasiveness that characterizes the art in our frenetic age, are the point. It may come as a surprise, then, that Hoffmann demonstrates such tenderness in her terse interpretations of landscapes, which are pared down until they resemble color field paintings. The gentle luminosity of these paintings goes beyond the frame of what seems more of a window than a canvas. What these share with her more stolid pieces is a comforting cohesiveness. Hoffmann is audaciously decisive and unwilling to leave the viewer in discomfort. She is almost messianic, taking on what our nervous generation, glutted with choices, is often unable to do: selecting a path knowing that this means the rejection of infinite others.