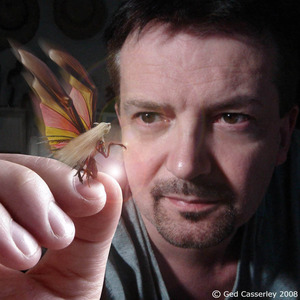 I was born in Manchester, i studied Art and Graphic Design at Salford College of Technology for four years 1977 / 1981, Since i have worked as an illustrator and Computer artist for major Manchester companies including QBF Heliogrammes, World International Publishers, Juniper Jungle Animation Studio, Ocean Software, ZedTwo Design Studio and Hands On Mobile working on artwork both 2D and 3D on many games including Jurassic Park 1 and 2, E.T., Future Tactics, Hanna Barbera Games, Disney, WPT "World Poker Tour", Marvel Games, and Need For Speed "SHIFT". I also Sculpt and in 2008 created a series of very small one of a kind "Faeries" from Polymer clay and resins and also using Natural mixed media: Some of these "Faeries" take many days and sometimes weeks or months to complete due to certain process's in the ageing and preservation of the natural media i use and the detailed sculpting precedures.

Studied Art and Design at Salford College Of Technology in 1977 on a four year course.
For many years i worked freelance as an illustrator for major Manchester companies Including World International Book Publishing as an illustrator, Ocean Software as a 2D and 3D computer games artist, Caffiene Studios and Zedtwo Games Design Studio.
I had one previous Exhibition at the Lord Daresbury Hotel, Chester Road, Daresbury, Warrington,many years ago, Showing some of my Portraits and animal paintings. "Media used", Gouache, Acrylic airbrush and Oils.,

Future Shows: I will be planning an Exhibition of my latest sculptures in Saddleworth West Yorkshire in 2011. Above is a few of my small Faerie sculptures that i have created. These small delicate sculptures are all encased in individual small acrylic domes for protection.