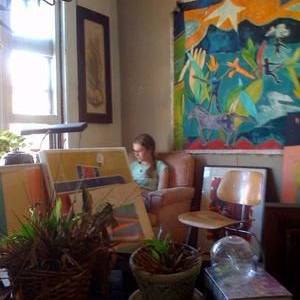 The linear forms in my paintings and drawings are symbols that translate into invented narratives. Lyrical abstract compositions are intuitive by nature and inspired by my dreams and memories of my past experiences. Impressions of invented symbolism are repeated through layers of intuitive mark- making that resemble aerial views, and mystical places.

I earned my BFA from Webster University and MA and MFA degrees from Fontbonne University. I received a scholarship to attend the Anderson Ranch Arts Center under the study of artist, William Christanberry. ,

“The recipients of the 2006 Visionary awards”, “Celebrating six women and their commitment to advancing the arts in the St. Louis community”, Alive Magazine, December 2006.