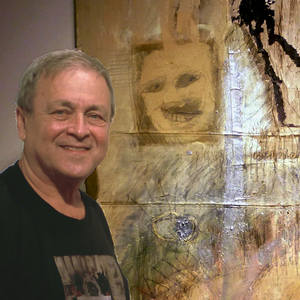 WasHere
This series is above all about memory"”how memory defines our perceptions of the present, as well as the past. The impulse, I believe, arose from my observation of the human predicament revealed through the disparate and often unexpected, in cultures across time and place. By reinterpreting primitive imagery as symbols of lost tongues"”this series intends to expose, by recombining symbology with my own emotional history, how memory is accessed and experienced. These random objects and images, then, serve as archaeological evidence, which necessarily shifts in meaning from viewer to viewer"”just as each memory added to the whole of one's experience reshapes that whole.
The series began with the discovery of a random spill on the street near my studio in Boston some twenty years ago. This eventually lead to my research and collection of "found" images. These might take the form of coffee or soda stains on the street, markings in uncured concrete, paint or other spills, which seem to resemble human or animal figures. I photograph them and add them to my collection of street creature icons. Or I might find actual objects, like crushed cans or lost gloves, which I can carry back with me to a studio that has come to resemble a museum of urban detritus.
I make photographic transfers from the photos, and incorporate them, along with other modes of technology and found materials, sometimes adding traditional painting methods. I might photograph or scan a passage of a painting I've completed, to be used in a digital print, monotype, or Monotype, in order to help add a grounded feel the work. Often, too, I add "found" words, taken from song lyrics or sayings.
Discrete elements within these constructions act as freshly imagined symbols that reappear in different contexts from piece to piece. The result is a growing conversation, in which their rootedness in common, though often overlooked, markings is continually transforming toward the iconic. In that spirit I have catalogued this series under the category of WasHere. Ultimately, I wish to explore the inexplicably visual dimensions that might reveal our transitory, vulnerable lives...and give it a whole new language.

As an artist, painter, printmaker, and digital artist... I am self taught. As a commercial artist I attended what is now High School of Art & Design.