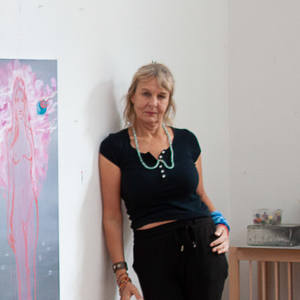 Images on „being thrown into the world“

In her artworks Eva Kunze connects moods and atmospheres

Eva Kunze discusses the process of being and becoming. Associatively she approaches our very existence – making references to the classical portrait and pursuing digital strategies. For the most part, however, the artist, who lives in Eurasburg near Munich, uses oil on canvas for her subjects, but also alu-dibond or wood serve as image carriers. Her expressive style creates a dynamic, her paintings are characterized by figures in inner turmoil – in a mythological atmosphere: woman with wolf, for example, emerges as a motif – as if one were diving into a dream world or into the subconscious as in analytical psychology. The contemporary man-nature divide is reversed.

With her dynamic brushstrokes she often follows the physical boundaries of the figures she depicts, blurring and partially dissolving them. Gender boundaries also seem threatened with eradication. The frequent use of monochrome backgrounds accentuates the analytical side of her technique: the subject is put on show in the foreground and empathetically examined.

The artist’s inspiration for her self-contained series is generated from magazines – where the woman is most often the centre of attraction, striving to assert her purpose: “I’m not the one you think I am”.
In Kunze’s preceding series, “Identity” (Identität), the game with social roles was the central point. Here the fashion style of a figure is evident: the female figures connect with heart and head or they slip elsewhere into animal costumes; they cover and expose themselves in an attempt to break away from all steriotypical expectations. Identity as performance, carried out with self-confidence in order to create and establish new impressions of themselves.

The size of the canvas can can be as much as two-and-a-half metres; the pastel shades of the composition support the often wraithlike appearance of the motif. Nothing is consistent. Ego is as volatile as phantasy. Again and again references are made to current political events: behind several strips of colour the portrait of the refugee activist, Carola Rackete, emerges. Somewhere else an over-dimensional refugee woman appears as a self-assured Amazon.

Eva Kunze’s figurative painting has developed out of abstraction.
Whenever a series of works has been completed, Kunze follows it up with a further, independent series in which the new theme determines the forthcoming process. The various different painting surfaces the artist uses (canvas, wood, alu-dibond) attest her interest in the individual nature of each respective work influenced by the variety of materials employed.

In her series “Verhüllt-enthüllt” (“Veiled-Unveiled”), Kunze applies projections and overpainting to the canvas – digitally-fed, processed and subsequently presented as C-prints on photo paper beneath acrylic glass.
Here, too, these are mostly portraits of females, veiled figures as if shrouded or cocooned but still always demonstrating an emancipated connotation, implying a transition into self-determined beings. The digital processing increases the photographic aesthetic, thus creating intensively-scaled compositions which result in the works appearing, in part, as negatives. Kunze also uses photography in current works as collages on canvas; her overpainting serves as additions or commentaries that produce the templates for her mythical mood paintings. By this interaction of photo and artwork the image, selected from mass media, is first examined and subsequently the viewing habits of standardized images of the “female” are broken up and expanded in Kunze’s seemingly fictitious emotional pictorial space.

2006
Studio Scholarship of the City of Munich

1992
Prinz Luitpold Scholarship
of the City of Munich