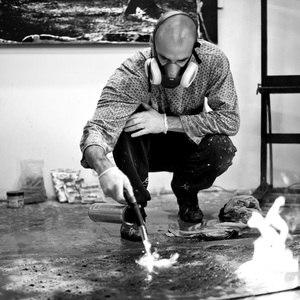 A skilled fine artist who dynamically fuses painting and photography, Paul Robinson born in Grimsby in 1982, is fast gaining critical recognition and a celebrity following for his exciting work.

His most iconic series depicts a pink teddy bear come-to-life and placed in the real world acting as a metaphor for discovery and exploration. The costumed figure – a striking motif in his work – exists between reality and make-believe, youthful innocence and corruption, leading a lifestyle that looks simultaneously enviable and questionable.

The use of the colourful anti hero and the way Robinson combines digital, graphic and photographic techniques have been acclaimed by purveyors of vanguard art ‘The Kids of Dada’ and supermodel Cara Delevingne.

A collection of work featuring the Pink Bear was recently exhibited in a solo show at Andipa Gallery Knightsbridge and is currently on display at exclusive London members club, Home House. A Pink Bear print recently sold for three times the listed price at Christie’s on behalf of the Terrence Higgins Trust and has also confounded guests in a provocative, live installation at one of Berlin’s hippest hotels, The Moxy.

Whilst the Pink Bear is an alter ego, hiding and running, Robinson’s other preoccupation is the truth of the naked human form. His most recent shoot for ‘Body Series’ features the controversial but beautiful Marco Pierre White Junior. For this study, Robinson experiments with paint and projects upon the body like a canvas. The results are stunning. Layered, bold and fluid Images which showcase Robinson’s technical skill and inventiveness.

Paul has lived and worked in London for over a decade but his ability and passion was spotted by inspirational teachers in his home town of Grimsby. Over the last decade, his work has been exhibited and sold globally in London, New York, Hong Kong, Barcelona, France and Dubai.

Following A Levels in art, maths, systems & controls and photography and a foundation course at Grimsby College of Art and Design, Paul completed a fine art degree at University College for the Creative Arts in Canterbury.

A Space For Art at Beyond
Kensington High St - London

Once Upon A Time
Radcliffe & Newlands - London

For The Love Of
Orbital Comics - London

Out On The Inside
Dubai, UAE

2002
The Interconnectedness of Everything
Grimsby College - Grimsby

Out Of The Ordinary
Jalouse - Mayfair - London