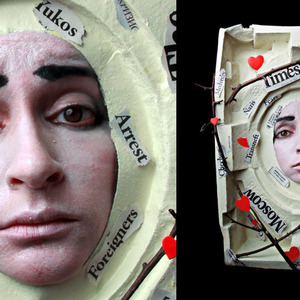 "I've never been interested in photography as in mere light reflection. I do almost never use photoshop. It's really interesting for me not only to expose the reality existing but to create, to construct my own version of it, to find protagonists. This process resembles theater, with costumes and scenery. Photography gives only a simplicity of exposure.

My works are mostly dedicated to globalization, up-to-date world processes, to conflicts aroused on the edge of historical traditions and new values of post industrial society. Shall we show the featureless office life or complicated perception of emigrants, we show always a person, a human being as a center: his portrait, his feelings, his sense of the world. As to the form, I work a lot with fast food, with modern colorful packings of products, cans of cola, French fries packs.. This is sure both a heritage of pop art that is close to me since my childhood, and 'brandmania' that is the tons of beautifully packed trash, due to the commercial demand, congesting our world. We are sinking in it. I guess this material is still topical, though I feel the need to deal with something more solid and everlasting."