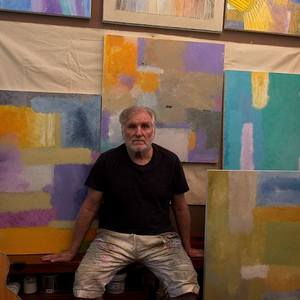 Relocated back to USA after 15 years in Thailand.,Studied at The School of Visual Arts , New York City . While in New York worked on the production staff of an Andy Warhol Productions movie. Studied at the Toledo Museum of Art School of Design. There studied drawing with Diana Attie, printmaking with Peter Elloian, and painting with John Botts. Was awarded a grant to study filmmaking and went to Denver University. Graduated from San Francisco State University in 1977 in Sculpture and Painting. There studied sculpture with Stephen DeStaebler , Bruce Newell, and Mel Henderson. During that period also took filmmaking classes at the University of California at Berkeley.
Had various jobs working with Architectural models, art foundries in Thailand and Shidoni Art Foundry in Santa Fe, NM.
Larry Coffin was a teaching tennis professional from the late 1960’s until 1994. He taught in Ohio, Aspen, Colorado, San Francisco, Ca, and Santa Fe , NM. He is now working on publishing a series of books of his artwork covering the past 40 years.
Was trained in Majorca, Spain with Maharishi Mahesh Yogi as a teacher of Transcendental Meditation and worked for the Students International Meditation Society teaching TM. Later became a student of Master Da Free John.
Retired to Chiangrai Thailand in 2005. Relocated back to the USA in 2020.

 In 1998-89 received a commission of $50,000 to design the Donor Wall for the Children's Discovery Museum in San Jose, Ca. This was a $10 million project inspired by Steven Wozniak, co-founder of Apple computer, and designed by the Mexican architect Larragoitte.
Received a Grant from Toledo Museum School of Design to study painting at University Of Denver.