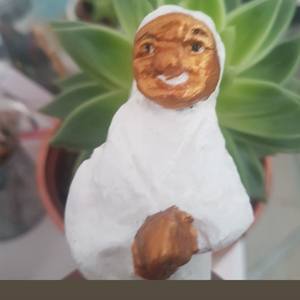 Born in London.
From kitchen table top, to connecting to the market place creating a hub of creativity.
I have had the opportunity and privilege to live and experience many different area's in England and addresses in and around London, living in different social conditions, with a different set of challenges and joy's at each location.

These experiences continue to be the biggest influence and inspiration for my work to date, inspiring imaginative impressions, which translate into expressions of fictional characters, and decorative designs.

Whilst I did attend formal schooling, I did manage to achieve leaving secondary schooling without qualifications.

Later gaining qualifications by investing in vocational training.
I initially took up sketching to help me with clothes design, attending a local community college, it was a cheaper option as a young parent at the time.

I come from a background of naturally creative people, where things like clothes were made without patterns, or any prior preparation for design. It was a time of instinctive survival, with a jump in and get it done way of living and thinking, learn on the go type of attitude toward life.
Writing poetry plays the role of being my first point of creativity, it is a combination of free flow journal writing, "free flow" is a method of unblocking personal expression. Examples of this is the pen sketch and textile remnant journals, where poetry, meaningful sayings, and short messages meet.
Expressing myself through writing journals, poetry, and even finding a way of writing threw creating an image, led me to explore painting as a further means of deeper self expression, exploration and release.

What emerged is a spontaneous method of painting, composition admittedly is not a study in every piece initially, but emerges in the form of allowing a subject to develop in a space, in whatever form or position it takes.

Coming from the era where Art was not seen as a proper job, taking that notion on - for a long time. I struggled to come terms with art as anything other than frivolity, despite being a creative.

To understand my work further;
The experience behind the creative process.

Throughout my life as a child to present day I have been effected by the collection of behaviours known as Stalking. As a child and teen I witnessed others experiences.

By 1991 at the address where two pieces of the "Sketch Book Collection" were created, I was 3 years into being the direct target of a stalker's intense campaign. This occurred prior to there being any recognisable law for such behaviours such as; following, and being of a persistent harassing nuisance and unwanted presence in a person's life, in the way stalking is now described.


Stalking destroys lives and can only to often be the precursor too murder and suicide! It is not something anyone does because you are not nice to them! There are neurological "clinical" reasons and patterns in an individual which serve as a cause and effect to stalking behaviour patterns. Leaving some individuals unable to understand - manage or have a measured response to growth that leads to change in a relationship or any given change in a life situation. (too mention a few reasons why.)
Being effected by someone suffering from jealously, "the right of entitlement" and the obsessive need to stalk, harass, control, not only does it have an effect on the survivor but the wider community of a survivor's life. It is an absolutely crippling and restrictive