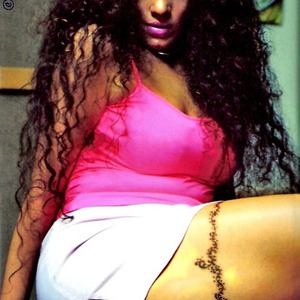 About Luccia A Lignan

Painter and Sculptress . Lives and works in London United Kingdom .

She has painted portraits from an early age, and an explosion of colour is found in her first attempts with paintbrushes at the age of nine. She paints the portrait of her maternal grandmother "Small artwork on canvas", which she still maintains, (Private Collection). Her great-grandfather, a French musician, whose family was mostly composed of theater actors, was an essential influence for Luccia in that universe of her artistic creation. Her elegant and reliable work, perhaps showing the legacy of her English great-great-grandmother. She goes to a painter's studio to receive private painting's class and finishes her education at The Faculty of Fine Arts Santa Isabel de Hungria at Seville University.
Her personal imprint and the beauty of her brush stroke have culminated in designs that merge the political, avant-garde, and collector communities. She likes her characters look, observe, rather than being observed. Her portraits are like the Beautiful Florence, elegant and somewhat reserved, they are pure simplicity, when you gaze at them, the most element emotions get back to you.
Luccia Lignan not only offers a creative panoramic aspect in painting, her artistic activity includes the cultivation of sculpture as well. Her first sculpture works show us an admirable irresistible personality, and her colourist talent in her polychromatic works, woodcarvings or bronzes.
Her painting and sculpture are inseparable. The feminine polychromatic woodcarvings and bronzes, run in paralell and are tied up to her pictorial creations.
Has a conceptual background in a group exhibition at Cordoba County Council in 1994 and her second at Alfaro Gallery Seville in 1996.
Next was a group exhibition "Young Painting", Tarragona City Council 1997. The figurative painting "Future in Balance", is shown at Maestro Mateo Prize - Caja Sur 1998 - Honorable Mention. She has coloured silhouettes and ironic homages to Boccioni at Cordoba County Council in 1998 (Baroque Patio). Travels to Italy, London, and rest of Europe. Later, individual and group exhibitions at Seville Architects College in 1999 (Echoes of Gutierrez Solana's work), Palais del Congre's, Aix-en-Provence (France), International Show des Seigneurs de L'Art 99.
Spaces at Palexpo, Geneva (Switzerland), Europt 'Art 99. In 2000, she celebrates her marriage to the Sculptor and Painter Angel Rengell. Additionally, she pays special attention to the nudes in her travels around the Bretagne Francais 2000-2001; FIA 2000 Venezuela, Los Angeles 2002. Expo-Arte Seville 2002, 2003; Art Miami 2003; Chicago (SOFA) 2004 Rennes (France), Art Miami 2005, Antares 2006, (among others).