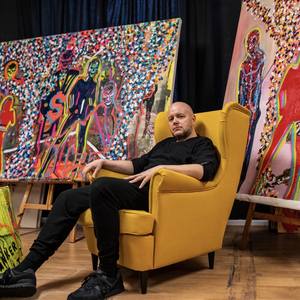 Lincoln Townley (b.1972) is one of the world’s leading contemporary figurative artists. Townley attacks things head on. He is unlike any other artist in the so called “art world”.

Over the past seven years his works have been exhibited internationally and bought by some of the most famous and powerful people on earth as investment grade art.
Townley’s original oil works on canvas and board are a reflection of what hard hitting successful people are willing to drive themselves through to become the best they can be. Townley is interested in powerful, dynamic people – winners. The kind of people who go out of their way to do the things that unsuccessful people are unwilling or unable to do.

Seven years ago, at his first small private show in a back street pub in London’s Soho back in 2012, you could have purchased an original Townley oil work for around £2k. The equivalent work today would be £100k. Many art consultants globally believe this is still only the beginning of his meteoric rise.

Townley’s art breaks all the rules. The go to artist for celebrity portraits. The royalty of Hollywood including incredible talent such as Sir Michael Caine, Cate Blanchett, Meryl Streep and Al Pacino to name just a few have been immortalised by his unique, contemporary style.