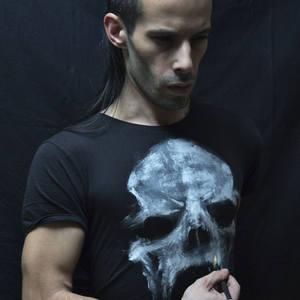 Born 1983 in Belgrade, Serbia
- In my work I'm dealing with human body, human perception, the way we see and project ourselves at the outside world. I am particularly interested in different states of consciousness, their impact on the perception of time and space - what we call reality. I believe that every state of mind can affect in which way the matter will appear.
Dreams as altered state of consciousness together with the symbolism of dreams (unique symbols of each individual and how we communicate with ourselves through them) is another important part of my work. The way in which we exist in this framework, for me is a huge source of ideas and insight into the human being.


- "Nenezic's work could never be described as shy and retiring. It's brutal and confrontational, tackling anorexia, illness, death, regrettable sex and even acne with unflinching clarity; warts and all, with actual warts. Nenezic has created bold work across the board, using collage [link ], video [link ] and a collaborative performance piece with artist Katarina Petrovic, God Gives you Pleasure [link ], where they created a suit with four built in vibrators and a dildo, each touch activated by making the "˜spectacles, testicles, wallet and watch' sign of the cross.
So it's fair to say his work is challenging. However in an artistic climate where displaying crucifixes in vats of piss (Andres Serrano) and art projects allegedly involving repeated induced miscarriages (Aliza Shvarts) raise more yawns than eyebrows; rubbing religion up against sex is par for the course. What sets Nenezic aside from the "˜I'm an art student and I'm sewing a chicken fillet to my breast in protest of tampons' crowd; is the fact that he has a breathtaking talent, a deft hand and a keen eye for imagery. Nenezic's paintings use eye-watering detail and competent classical form to bring beauty to the most gruesome of subjects, reflecting an imploding society back to itself.
Nenezic's themes, such as one night stands (the stunning 'The Moment After' series) and extreme body modification (the 'I'm so Beautiful' series), ensures his work captivates a modern audience, whilst his use of colour and light is reminiscent of Ingres' bather, with the angular distorted bodies channelling Egon Schiele's self portrait and the various secretions of Francis Bacon's fleshier works.
It may not be pretty or tasteful, but Nenezic's work entices discussion and incites a visceral reaction, whether it's a postwar commentary on the psychological state of an unstable New Europe, or a glimpse into the rotten core of humanity; it's more than can be said for a slew of artists who use shock without value."

Graduated at "Faculty of Fine Arts" in Belgrade, Serbia, 2008, department of painting.