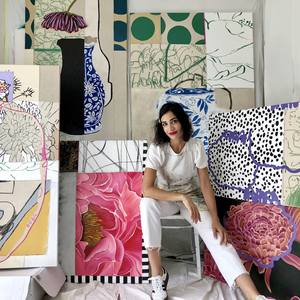 Artist Nadia Jaber (Spanish, b. 1986) channels the artist as a postdigital algorithm, an online magpie curating a found line, shape, and color to generate an analog version of the digital stream of information. Nadia’s work reflects not just on our visual ADHD but on what the mysterious machines behind social media are making us want, or think we want, and what that means for art appreciation. Her work has been featured in “15 Emerging Female Artists To Invest in Before They Blow Up” selected by Saatchi Art Head Curator Rebecca Wilson, and her paintings have been included in interior design projects featured in AD Spain Magazine. She has participated in the Other Art Fair by Saatchi Art in NY and had a solo show in LA. Also had participated in Art Fairs in Madrid and Mallorca.
Nadia Jaber’s paintings jump around, scrolling between textures, flipping tabs into new color palettes and stretching materiality. She riffs between styles and ideas, cutting and scratching them like a DJ would, to curate something entirely new. The eyes and mind can keep up of course, because we’re used to this hyperactive image intake - we do it all day, every day on our phones.
Nadia’s work is a full-scale rebellion against the smoke and mirrors of social media, the ultimate collage of the current algorithmic syncretism and acknowledges not only Nadia’s belonging to the digital art revolution, but points rather gratefully to Art’s ultimate dimension, its digital kingdom, where artists thrive, collect, exchange, buy, sell, and perhaps, more definitely, find inspiration and half live.
Nobody with their wits about them would question that the art world is increasingly virtual and that its health hasn’t been better in decades. So the question here prays: are technologies to blame or to praise? Andy Warhol, one of the most accomplished ambassadors of appropriation, was ecstatic after discovering the wonders of silk-screening. In one of the fewest interviews available online —omnipotent technology in full bloom— Warhol told to Art News’s reporter Gene Swenson a rather legendary line: «I think everybody should be a machine. I think everybody should like everybody». It was 1962. Warhol anticipated not only the behavior of today’s technologies but the ultimate lust of artists like Nadia, who are openly challenging themselves to become precisely that same technology. Nadia claims her desire to ‘operate like an algorithm’ and acknowledges that the breadcrumbs spread over her creative path by the Instagram one, have helped her discover the current inspirations for her work; inspirations that have actually become her work in some classical appropriation fashion. In her statement of digital belonging, Nadia reflects on the search of her true voice as an artist that has found herself dazzled by the myriad of constellations developed by social media and their insatiable algorithms. Being supported by such a powerful source has definitely changed her creative process, her interaction with the world and her way of living in some equally unavoidable way. So the question is not what to focus on, but rather how to focus at all.
Warhol, Duchamp, Burroughs or Lydia Lunch dreamt of the same language, where cut and paste was a frequency that stitched together the voice of multiplicity. At the end of the day, a piece of art is like a piece of anything else: something slightly concluded yet unending, seamless and sewed, a traveling light, that has been repeated, reflected, destroyed and rescued endless times. Any creative work carries a voice in itself that unites former dots and completes the seamless work of the traditions before us while engaging with progress and dreaming of upcoming revolutions. Nadia knows well that we are in the thick of the latest one and acknowledges it physically using a thread that sews and stitches together the virtually appropriated pieces.