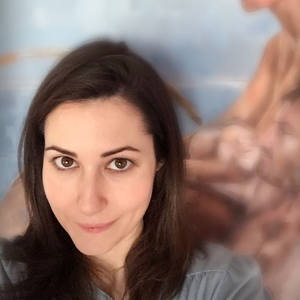 "I am interested in combining representational versus abstract, precise versus gestural, deliberate and considered versus accidental, painted shapes and shadows versus sketchy lines. I like using pallet knives and building up on the canvas the texture of my painting as well as scraping part of it, leaving behind marks of the process. I try to stop working on a painting before this is finished, so the viewer will be urged to realize and feel the wholeness of it."

Nadia Rapti is an artist currently living and working in Athens, Greece. She received her degree in Architecture from National Technical University of Athens (2002) and a Master’s degree in Design Studies from Graduate School of Design, Harvard University (2004).
Painting has always been her passion from early childhood and since 2013, has been professionally painting and has participated in group exhibitions in Greece and abroad. Her work has been selected by foreign curators and has been published and promoted extensively.