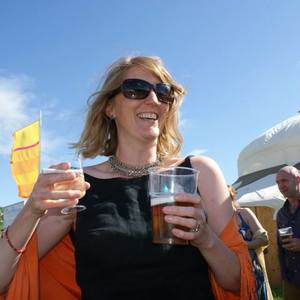 Born in Cheshire and now living in Shropshire Natalie graduated from the University of Central Lancashire and later specialised in Stage Set Design at the Welsh College of Music and Drama in Cardiff.

Natalie started painting professionally shortly after moving to Shropshire but has been a creative practitioner for the past twelve years working with children of all ages and abilities on a variety of arts projects.
"I have always enjoyed working on a large scale and think this particularly developed after completing the stage set design course in Cardiff".

Since 2003 she has been working on a series of intricate flower and bird portraits, and has had a number of well received exhibitions throughout Great Briton for example; the Judith Blacklock gallery Knightsbridge, Three Cork Street galleries in London, Birmingham City art gallery and the Royal Academy to name a few.

Georgia O'Keefe, Karl Blossfeldt and early 17th century Dutch painters such as Ambrosius Bosschaert have a huge impact on her work.

The flower itself is just the starting point for an abstract study of transparency, colour and form. The effects of sunlight and shadows are having an increasing effect on my work, the subtlety of colours and how dramatic the subject becomes a unique moment in time.
Each flower is so different, offering delicacy and detail but at the same time is strong and powerful. It's these differences that fascinate me and I try to capture that essence in my work.

The scale of my work is important. It makes no apologies. By enlarging the scale the nature of the subject is intensified, and enables me to see further into the flower.