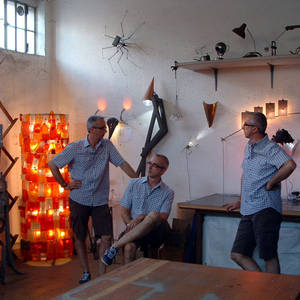 I was born in Turin 1966; I have frequented the "School of Applied art & Design" of Turin as Car Designer. From the 1994 dedication to the sketch and the realization of tied up objects to the ecology and the recycling, employing the most varied material. My search aims to revalue objects that the express to proceed some consumerism has made to live for brief time, proposing them in a different context from that for which they had been projected trying to enrich them of a certain elegance and equilibrium between past and present. Some of my projects have been selected to many contest and exposed in numerous shows among which "Echo Way" on the occasion of "Abitare il Tempo 95" to Verona and Copenhagen for the show "DESIGN AS IDENTITY" at Louisiana Museum.
My BRAVALAMP has won the first prize to the contest "Fatto ad Arte" of Todi and the piece chosen by Alessandro Mendini for the show "Design as Identity" is entered to the collection of the Museum of Decorative Art & Design of Gent in Belgium, one of my lighting sculpture is entered to the collection of GAM of Turin.
I was drawn the trophy "Sport Pulito" for the Regione Piemonte and from 2001 to 2002 it is busy of the preparation of the iconographies for the EXTRAFESTIVAL in Turin and I designed the banner of "Suoneria - La Casa della musica".
My "Sedia Acida" was chosen by Mendini and exposed to the Third Triennial of Milan.
I worked with FranÃ§ois Confino and German Impache to the realization of some interactive installations for the Museum of Wine in Barolo.
The last best work was the construction of a light installation in one of the rooms of the renovated Hotel San Giors of Turin.

I studied as a car designer at IAAD of Turin in Italy.