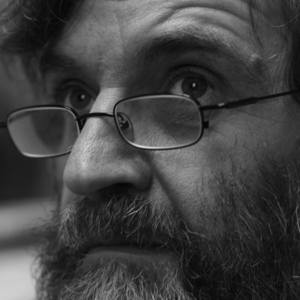 ART seems to be more like the huge compost pile in my garden than the sterile infant ward, where I actually was born. Trying to survive as an artist, many drowned in the juice of their own feelings. Certainly one cannot study art. As well there is no one who understands all this stuff. History is written by its victors just like art-history. And so these strange inconsistencies arise: If one makes an excursion to the moon and chokes on all this ugly moon dust... Fortunately, I have not studied art the purest form of utter absurdity. I trust no one since childhood. A freshly-whitened panel seems suspicious to me. If I cannot stop myself and start painting, it becomes more and more difficult. In order not to lose the upper hand, I go back step by step... Sometimes I defiantly refuse painting, maybe for weeks or even for a year, to starve out all these crazy thoughts. And the whole time I rack my brain, whether they have already starved... When I finally resign after a long time and take up a paint-brush, so that it will not rot in the wash water: Then suddenly they are back, these unspeakable thoughts...

1988 Class Emilio VEDOVA in Salzburg
1980 College of Mechanical Engineering
1977 General Qualification for University Entrance
1958 Born in Vienna, as the son of German-Hungarian and German-Yugoslavian refugees

More Information about my paintings and safe packing on www.petto.at - Studio
2018 I was featured: Resident Magazine Aug Issue
2017 Sept16-Oct14 Exhibition OFFSPACE Club International Vienna
2016 Oct19-Nov18: Exhibition Art School Vienna
2016 Jan19-Mar18: Exhibition Art School Vienna
2015 A Red Cloud has flown away...
Aesthetica Magazine Dez/Jan Issue
2015 Visit my daily Twitter Account !
2015 Aug14-Sep12: SOLO exhibition and reading, Tacheles Gallery, Austria
ROB SCHOLTE invited me to his network on LinkedIn.
New image descriptions, nothing about hanger...
Press the buttons above and be surprised...
MIEZI is now friend with me. She sleeps even in my bed and doesn’t worry about… See MIEZI and many paintings in my Studio: www.petto.at
2014 Saatchi Art discovered me
2013 I discover internet, and internet discovers me. I am surprised how easy I can be found by now. My Site Art Brut & Humor has thousands of visitors. Try on by Google: “Brut Humor” or “Outsider Humor”
2010 Being committed to a Psychiatric Hospital, a Kathatym Imaginativ Psychotherapy has followed for several years