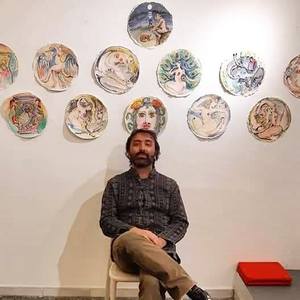 Philippe Laferriere is a Visual Artist and Art Teacher based in Thessaloniki, Greece.
Born in 1974 in Toulouse, France. He studied at the Ecole des Beaux Arts (1992-1995), has a degree in History of Art and a Master in Classical Archaeology at the University of Aix-En-Provence (1995-1999). He is also gratduated from the School of Visual and Applied Arts (Aristotle University of Thessaloniki).
The development of a survey about the painting of Macedonian Tombs brought him to Greece in 2000, where for a decade he worked as a conservator of works of art.
Since 2010, he took part in many group exhibitions and regularly shows his work through solo exhibitions and performances (action painting) in Thessaloniki, Athens and across Europe.
His work was exhibited in November 2017 for the 6th Biennale of Contemporary Art in Thessaloniki. He is also an Art Teacher in Preschool .