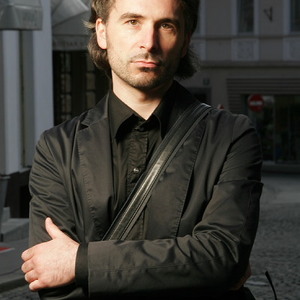 Painter, art theorist, journalist. This is all of my art production so far displayed in no chronological order. I try to maintain strict quality control so I destroy more then I preserve. There are also several You tube clips about my work that can be found by clicking on the icon above. The other icon above takes you to the virtual display of my work shown right now at Generali gallery in Ljubljana. The solo show runs till early April 2021.

I was the worst student Ljubljana's Academy of Fine Arts could ever have. I barely passed the last year with the lowest grades. After finishing studies I wanted to drop art altogether. I got a job at the national TV of Slovenia where I still work as a journalist covering visual arts, architecture, comics, classical and contemporary music etc.

After the millennium I started painting again. At first under strong influence of Basquiat, whose show I saw in Trieste at the end of the nineties. Actually it was Basquiat's show that pushed me back again into producing art. After 2003 I wanted to get rid of Basquiat's influence. So, one time I carried this one piece that had again been done in his style under water, while it was still wet. Water partially washed the image away. There was a silent scream in my head: "Look how the image dissolves." Washing the images away with water became my dominant painting technique. There were a couple of series of paintings made between 2004 and 2006 using this technique in a variety of ways. Between the beginning of 2007 and the beginning of 2010 there was a pause though. I was trying to expand on this idea and technique but wasn't successful. I realized later that I was trying too hard to show my invention as such. In early 2010 I came up with the necessary evolution. Since then, my work procedure can be described as follows: I make an image with paint. I then wait a couple of minutes till some of it has dried. I then wash the image away with water. Patches of paint remain, of course. I then repeat this procedure with another paint until something gets formed out of patches.

Why is all of this important? This procedure of mine gets me beyond simple illustrating. It makes the onlooker feel as if the images got on the canvas all by themselves.

At work with TV Slovenia I had been, between 2012 and 2015, engaged in writing a widely read and commented column on contemporary art.

I've only had a few exhibitions at relevant institutions so far so I will only list these:
- Solo show at Equrna Gallery, Ljubljana in 2003. Equrna has cult status in Slovenia.
- Twice at Affordable Art Fair in London in 2008 and 2009.
- Group show at MGLC in Ljubljana in 2010, showing with the most relevant Slovenian contemporary painters. MGLC is a respected institution that organizes The Bienalle of Graphic Arts, the first and the most respected of its kind in the world.
- Two solo shows at Visconti Fine Art gallery in Ljubljana in 2010 and 2011. They are a very respectable private gallery.
- Solo show at Bezigrad Gallery in Ljubljana in 2012, which is also a very respectable place.
- I took part at 2014 group show at Villa Manin, Italy which showed the best of Slovenian art in the last 50 years.
- Solo show at Coastal Galleries, Monfort venue in 2014. This is my first museum solo show in one of the largest single space galleries in Slovenia.
- Group show at Kunstlerhaus, Vienna and Gliptoteka, Zagreb in 2015 showing the best of Slovenian art in the last 50 years.
- In 2017 solo show at the Gallery of Painters' Society of Slovenia, curated by Miha Colner.
- In 2018 I had a solo presentation at Discovery Art Fair, Frankfurt.
- In 2019 I showed at Europart Fair in Amsterdam.
- I was a part of a group show of Slovenian "Metamodernism" that was curated by Marko Kosan. Kosan's show travelled to public galleries in three Slovenian towns, Slovenj Gradec, Ptuj and Portorose.
- Solo show at Generali Gallery in Ljubljana was opened at the end of 2020.
- Solo show at Kibla Gallery in Maribor is scheduled for summer 2021.