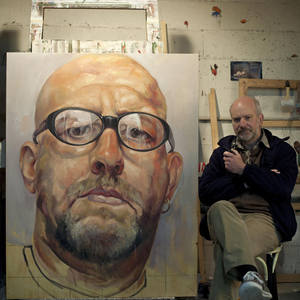 Born in Catamarca -Argentina in 1954. Lives and works in Spain since 1988.A native of Argentina, Pablo Schugurensky creates works that boldly interpret the people andplaces around him. Today he lives and works in Spain, but the sights and sounds of Buenos Airescontinue to influence his work. His style, marked by masterful renderings, social commentary, anddeep psychological insight, calls to mind the unblinking realities of great Spanish artists Goya andVelazquez. Schugurensky has also expressed great admiration for modern masters of statements oncanvas such as German Expressionists George Grosz and Max Beckman, and the Anglo-IrishFrancis Bacon. In the last decade, Schugurensky has taken these strong European influences andblended them with Argentinian themes, creating powerful portraits of the unknown denizens ofBuenos Aires' brothels and music clubs, as well as tributes to well-known countrymen CarlosGardel and Astor Piazzolla. This exhibit will feature a selection of works that mirror the ages ofhuman life, contrasting young and old, beautiful and ugly - while capturing the inner dignity andcharacter of all his subjects with a bold, sympathetic, and unapologetically confrontational eye.