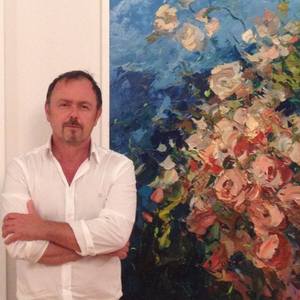 Agostino Veroni was born in Livorno, as a child he shows interest in drawing and colors. At sixteen, by chance, during a dinner at the home of his paternal grandfather he meets the painting master Ferruccio Mataresi. The meeting marks the first decisive step in his career. He begins shortly thereafter, and in effect, continues for years to study with Mataresi with whom he studied classical design. Veroni though does not stop at design itself; he discovers more and more importance in his desire for color, and the physical medium on the canvas. The master Giulio da Vicchio encourages him to follow his instincts as a colourist. With the master Masaniello Luschi he explores this concept starting to paint from real life; he researches the coastal areas, the surrounding countryside. After this comes the turning point; Veroni combines first mentally, then on the canvas, the design, the color caught en plein air. The drawing takes a secondary place behind the chromatic sense given by the combination of colors and the bold energetic brushstroke. In certain paintings it is possible to see an evolution towards the abstract especially in some sea storms where the drawn figure is absorbed by the contrast of colors and the combination of light and shades that favor the pathos. In 2010 he joined the Group Labronico, the historic group founded in 1920 by important painters in order to enhance the art of Livorno. He has had numerous personal exhibitions both in Italy and abroad and has also participated in several National and International art fairs. His works can be found in private collections in Italy, and abroad.


It is pure poetry.
Agostino Veroni’s painting, his art, his work lead us into a particular state of the soul made of real poetry, elegance, formal harmony.
He comes from Livorno and is therefore linked to the Tuscan tradition, which, though it is clear in his work, is nevertheless, an influence that he manages to foster, innovating and personalizing his themes.
His work comes in cycles and we will find landscapes of the countryside, seascapes, flowers, all those visions that make of him a questioner who is able turn himself into a formalist or even a meta-formalist capable of changing a whole Copernican system with each gesture he makes and with the colours he finds.
He has learnt Turner’s lesson – how to dissolve form through colour.
And it is precisely colour which turns out to be Agostino Veroni’s great obsession, his major field of research, the instrument through which he reads his own spirituality as well as the landscape in question or whatever else he might have decided to paint.
In him the lessons to be learnt from the French Impressionists are still in force: he does not so much paint a landscape as the very sensations that same scene has given birth to inside him. And then geometry and perspective can be left behind in favour of the search for colour.
That is evident in all of his canvases, and can be felt in his sense of fun, the play of paints that he creates as soon as he takes the brush in hand.
Agostino Veroni starts off from a solid tradition, but he does not stop there. All his creative gestures are the offspring of a universal state of art, asking questions in a permanent dialogue between the observation of that which is and his inner voice that filters the artistic vision. All this is then bonded to his main interest, which is colour, laid on, now with more strongly marked, more material movements, now with more greatly refined elegance, the type of colour that generates surprising new combinations, pathways, itineraries of the soul and of the instincts that go beyond any rational planning of a single work of art in fulfilment of his desire and his need to create a work that is unique in itself on account of the vibrations of its colours..
His earthy ‘material’ essence is a characteristic that somehow belongs to him, just as that international genetic code in his paintings makes it easy for him to dialogue with all kinds of realities. An attitude this that Agostino Veroni has been able to put into use on his travels to exhibitions in many different countries in the world, including the Unites States.
Without ever laying aside the Tuscan tradition or the wider practises connected with the universal history of art – and in the first place the lessons learnt from the impressionists – there is in him a strong individual identity that creates poetic visions. In particular, his recent cycle of water-lilies brings Claude Monet to mind, at work in his garden in Giverny, and this is one of the reasons for placing his paintings in the section dedicated to Monet in Expo in Città, Expo 2015, during the event ‘Art and Time’, from an idea by Giulia Sillato, who is also – in collaboration with the present writer – the director of the exhibition which will be taking place in June this year in Piazza Duomo, Milan. Agostino Veroni accepts that comparison, but makes no reply. Instinctively in love with colour, a free spirit, aware that as far as he is concerned, any theme is merely a pretext for artistic, pictorial expression, he simply carries on with his own research, personalizing it with that unmistakable touch which only a true painter can have, only those artists that have the ability to write their own original scene in the great comedy of the story of art.
So it is that we do not find the garden of Giverny in his water-lilies, but the feelings, the fears, the emotions and the free and dynamic views of a great master, a man who has decided to become the Italian ambassador of colour to the world