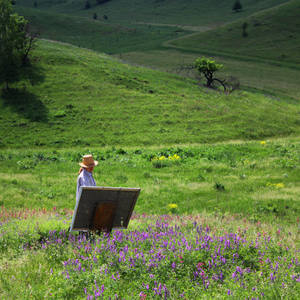 Yarovy Ilya Nikolayevich, born in 1983 in the family of artists: Yarovoi Nikolay and Sergey Anna, in the city of Sumy. The first event in art life at the age of three years took part in an international exhibition in Paris devoted to the anniversary date of the birth of Malevich became the youngest participant in the exhibition.
He studied at the Sumy children's art school at VM Soklakov and T.M.Surkova. During the study took active part in regional and national exhibitions and competitions of children .In 1995 won first place gold medal at the International Children Festival - "Underwater Fantasy" in 1996 took third place at the same festival. In 1997 - the first personal exhibition. In April of the same year I took first place; Scholarship is the laureate of the competition at the Ministry of Culture "New Names of Ukraine". He was awarded a trip to Artek, the Ukrainian competition - the festival of children and teenagers "Our Ukraine-Earth" which won first place in the field of fine arts diploma. Fourth of March 1998, a personal exhibition in the art center "Cathedral" of the Sumy Regional Branch of the Ukrainian Cultural Foundation.
Studied at the Kiev Taras Shevchenko Republican Art School, at the picturesque department at V.G. Trotsenko. After which studied at the studio O.G. Titov.
In 2002 he entered the National Academy of Fine Arts and Architecture in Kyiv. He graduated from the Academy in 2008, received a complete higher education in "fine and decorative - applied art" and qualification .Navchavsya painter in the studio VI Gurin and AE Zorko. He also studied at: A. Solid, A. V. Yalansky, T. M. Golembievskaya, V. G. Vydodova-Gottier, Yu. M. Yatchenko, O. G. Vasiliev, V. V. Nedyaborch, MP Sočenko, P.O. Basantsy and others.
2003 Personal exhibition in the Greek-Catholic center of Kyiv.
Since 2001 I have been actively involved in all-Ukrainian, academic and regional exhibitions and competitions. I took part in the All-Ukrainian Triennial of Painting in 2007-2013. Participated in charity auctions and international contests. 2010 Member of the National Union of Artists of Ukraine. 2011 The personal exhibition in the city of Kiev is the Dali-Design Gallery. 2011-2012-2013-2014-2015 Gallery Karas group exhibition artists paint handles. 2012 The winner of the Cultural Foundation is worthwhile of Russia.
2012 Personal exhibition of Lebanon. 2012 Family Fair Dara Art Center
2012 A number of major international exhibitions in China: Beijing Art Expo 2012 (Beijing), Art Canton 2012, 16 Shanghai Art Fair 2012 (Shanghai), 17-Guangzhou International Art Fair (Guangzhou). Family Exhibition at the National Academy of China (Beijing) ... 2012. Family Show of Datr (Dubai) 2012 Switzerland Geneva, in the exhibition hall of the Swatch - Cite du Temps time group - a group exhibition. 2017 Personal Exhibition Galeria Kiev 2017 Group Exhibition of China. 2017-2018 year group exhibitions Gallery Terminal Kiev. 2018 Group Exhibition China.
The works are in collections: the National Academy of Fine Arts and Architecture of Ukraine is the city of Kiev. The National Gallery of China (Museum) Pikin, the Museum of Underwater Painting of France, the Primate of the People's Republic of China Hu Zin Tau, the Cabinet of Ministers of Ukraine, the Chamber of Commerce of Russia, the cultural heritage of Russia, the corporate collection of the company Yerikson, in the collections of Igor Voronov, Pierre Bashir, as well as in private collections of famous people, collectors, politicians.

A personal exhibition of the spouses of Yarovy Ilya and Afanasyeva Anna opens at the National Bank of Ukraine, Kiev, Institutskaya Street 9. The exhibition will be held from August 13 to September 29.

Personal exhibition of Ilya Yarovy Gardens for the mirror. Will take place in the National Museum "Kiev Picture Gallery" art center "Chocolate House" Ukraine Kiev city street Shelkovichnaya 17/2. From May 14 to May 26th.