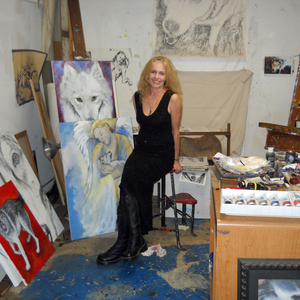 I was born near the birthplace of Georgia O'Keefe, in Sun Prairie,Wisconsin. She was an early influence and role model. I've lived and worked in Madison, Wisconsin, Chicago, Key West, and now work out of my home studio in Orlando, Florida. I love dogs and have five of them, all rescued. They are my family.

A photography background is evident in my paintings, which are often based upon my my photographic images. I studied photography (black and white, film) at the University of Wisconsin. While my photographs are now primarily digital, I prefer film images and love to print photographs..

My painter's palette is influenced by the Impressionists and the German Expressionists, particularly the Fauves, or "Wild Beasts". I use color to create a mood or evoke a particular feeling. Landscape images are composed to draw the viewer into and throughout the painting. Figure, portrait and landscape images are idealized and exaggerated both in the way they are drawn and the colors used, to create a unique beauty. I strive to create windows to the world as I see it.

I believes that our society is deprived of the visual stimulation and excitement created by the vibrant hues we loved as children. I have been told that my art enhances the lives of my patrons.

COLORS THAT SATE THE SENSES CREATE BRILLIANT MULTI-HUED DREAMS EMBODIED BY PERSONAL SYMBOLS,GLOWING LANDSCAPES,AND IDEALIZED MYTHIC BEINGS. MULTI-LAYERED PERSPECTIVES DRAW YOU INTO A SCENE AS YOUR EYES EXPLORE IMAGINARY VISTAS.SEE THE WORLD THROUGH HER EYES.

Educated at the University of Wisconsin, Zuelsdorf has a Bachelor's Degree in Fine Art, with a concentration in drawing, painting, photography and printmaking.I've been an artist as long as I can remember. I love to paint and I couldn't live without color.My internationally collected art has been viewed in juried exhibitions, galleries, local art shows, and several one-woman shows. I have performed at numerous live painting events, in which a work of art is created before a live audience. I was a featured artist in a documentary film called "The Art of the Illuminati".From 1998 until 2004 I worked as a scenic artist, painting anything and everything at theme parks including the Magic Kingdom, MGM Studios, Epcot and Universal Studios Islands of Adventure in Orlando, Florida. That was by far the best and most adventurous job I've every had. I got to work HUGE and by that I mean ten by forty foot murals, humungous sides of buildings, giant mushrooms, a forty foot tall Indiana Jones, mudflats for rhinos .... you name it!Painting on a huge scale was very physical. I'd throw myself into the physicality of painting and dance my way across the canvas. That job taught me the value of the process and I've incorporated that into my work ever since. I believe that paintings should be done with the largest brush possible, so that the gesture is evident in my art. SELECTED EXHIBITIONSTen Women Art Show, Orlando, FloridaPerceptions of the Other:Exploring Cultural Diversity, Maurice Spertus Museum of Judaica and South Shore Cultural Center, Chicago IllinoisOrlando Museum of Art, Orlando FloridaBare Walls,Great Southern Gallery, Key West, FLoridaEight Woman Photographers, Memorial Union Theater Gallery, University of Wisconsin, Madison, WisconsinGreat Lakes Regional Photography Exhibition, Eastern Michigan University, Ypsilanti, MichiganClub Firestone,One Woman Show,Orlando,FloridaClub Voodoo, Key West,FloridaDexters Restaurant, Orlando, Florida - one woman showStill Life in G Gallery - One Woman Show, Gainesville FloridaVarious Illuminati events in Orlando, FloridaPrevious Gallery RepresentationLucky Street Gallery, Key West FloridaA Different Perspective, Orlando, FloridaStill Life in G, Gainesville FloridaCurrently a self-representing artist selling work from my own studio.,