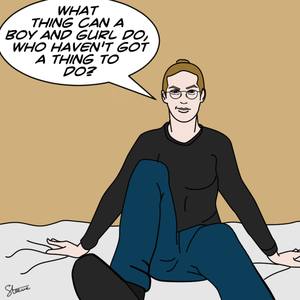 It is likely that Juan Sly has become the biggest seller of original artworks in the UK. An artist exhibiting in mainly spray stencils and oils. He has exhibited at the Saatchi (a proper gallery with pillars and everything!) alongside the likes of Banksy, Terry O'Neil, Tracy Emin and Vic Reeves and now has a permanent collections in Germany, Detroit and the Uk, alongside Damien Hirst and some other artists you might of heard of plus private collections around the globe. His works rock from humour to anti-war, sex to surreal. Particularly fond of the stencil medium as it allows him to quickly respond to events and ideas and gives the work that gritty illegal look. The stencils naturally allow the works to be resprayed and so become affordable and disposable. He likes the fact that people can buy art that they like and not to show off how much they can afford. You can find them in bedsits, legal offices in the Temple or stuck to a fence in Bristol.

Juan Sly entered his first art competition aged nine with a subtle study of an arrangement of Lupins. He won third prize. He should have won first prize but the entry was so good it was obvious, to the judges, that he had had parental help: which was ironic, because he was an orphan, and nobody gave a shit.

Juan Sly had a tough upbringing on the tough side of Tough Town. He had to fight for everything he didn't have. After boxing he did art; after football he did physics; after dark he did many things like opening locked doors especially ones on safes; but he only stole off those who deserved it. He was well known to the police but never convicted and had proved useful to them on several occasions.

But then a new life in the light beckoned; and it seemed as if a guiding hand was at work for him, one that could open doors even better than he could. He got a precious place at university studying physics and then on to a prestigious research position at Cern. He had everything, now, but a past.
He had left the dark world he had inhabited for 22 years behind.

But had it left him…?