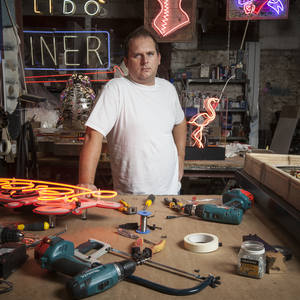 Matthew Bracey born 1976 in East London England. Currently living and working in London.
An Electrical Lighting Engineer and Father of three sons and one daughter happily married since 2002. Son of the late Chris Bracey – The Neon Man.

Matthew Bracey is a British neon light artist whose work follows his father’s love for neon art. Continuing his father’s legacy on a day to day basis, a maker of all things light.
Having worked within a family business producing neon for the commercial advertising industry for over 23 years along with his family he is creating beautiful vibrant neon signs and artworks for hundreds of clients that include the likes of Sotheby’s, Selfridges, Coca Cola, The Tate and Google. For over 23 years Matthew has also worked on many TV and film productions, including Mission Impossible, Batman, Tomb Raider, Doom, Captain America and Charlie and the Chocolate Factory which are just a few of the larger productions.
In the 1980’s the business was run from a workshop beside the family home in Wood Street East London. Matthew’s memories of early days as a child was helping his father building signs by hand, During the mid 1990’s Matthew would help his father Chris creating neon signs for the sex establishments in Soho London. The family business Gods Own Junkyard over the years has salvaged signs and advertisements from destruction and restored them to their former glory. The Bracey family opened Gods Own Junkyard Studio to display the collection to the public which holds the largest collection of neon in Europe and attracts visitors internationally.
Matthews work is created using materials such as reclaimed wood, rusty metal and neon glass. He has hand painted signs with glitter, led bulbs and loves to use all colours of the neon rainbow.
‘I get such a thrill watching the happiness on faces when neon lights up’. I feel a bit like the Willy Wonka of Neon, if you could eat neon, chocolate would be the next best thing’.