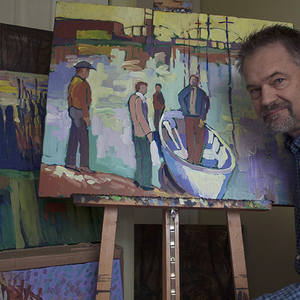 I have been interested in art since childhood. Following art school, I have spent over 30 years as an advertising/graphic design professional. About 6 years ago I was able to begin painting again in earnest. My particular artistic journey began with an abiding interest in Fauvist landscape, especially those of Andre Derain and Maurice de Vlaminck. Bold color, expressive brushwork, and simplified drawing were also the hallmark of my work at that time. As other influences came to bear, including the German expressionists, the Blue Rider group, and individual artists such as Paul Serusier and Grace Hartigan, my work has been moving inexorably toward abstraction.

I have a BFA from the Cooper Union for the Advancement of Science and Art in New York, NY.

I have been selling work online and in private sales for 6+ years. Examples of my work can be found in private U.S. collections in Arizona, Arkansas, California, Colorado, Connecticut, Delaware, Florida, Georgia, Illinois, Maryland, Massachusetts, Michigan, Minnesota, New York, North Carolina, North Dakota, Ohio, Pennsylvania, Texas, Virginia, and Washington, and internationally in private collections in Canada, Sweden and the United Kingdom.
In the spring of 2014, my painting Sylvan Scene was selected as a winner in the Fine Arts category in Creative Quarterly 35, an online and print arts magazine.
I was selected as one of 2014's top artists by Creative Quarterly magazine. The winners were chosen by a panel of judges from all
of the work that appeared in the four issues of Creative Quarterly during 2014. My entry Sylvan Scene was featured in CQ's special 100 Best Annual, which was published early in 2015.

In January 2014, nine works were exhibited in the Lancaster County (PA) Art Association’s Steinmetz Gallery, as part of their 2014 Invitational Show.
In June 2014, an exhibition of paintings entitled Local Color: Paintings of Robert Hofherr was held in the Hamilton Arts Collective gallery in Baltimore, Maryland.
Also in June 2014, my painting In Worcester County was selected as the second place winner in the water media category of the Lancaster County (PA) Art Association’s juried show for 2014.
In September 2014, my painting Cliff Face was selected for inclusion in the Maryland Federation of Art’s Strokes of Genius national juried show.
Three paintings were part of the exhibition Present: HOME, The Gift of SITE for the Center for the Arts at Harford Community College’s (MD) Chesapeake Gallery from September 30 through November 3, 2014.
Two paintings were exhibited in the Cecil County (MD) Arts Council’s juried show in October 2014.
My painting Morning on the River was exhibited in the Fredericksburg (VA) Center for the Creative Arts’ juried show Primary Colors in November 2014.
My work Storm Over Derryclare Lough was accepted into the juried exhibition Stormy Weather, sponsored by the Maryland Federation of Art. The show took place in late January 2015 at the Annapolis Maritime Museum.
A solo exhibition of recent paintings, Living Color, took place from March 6 through 30, 2015 at the Cecil County (MD) Arts Council’s gallery in Elkton, MD.
Two of my paintings were accepted into the Lancaster County (PA) Art Association’s national juried exhibition for 2015. My work Tudor Fantasy was awarded second place in the painting category. The show was held from June 7 through July 19.
Also in August, my work was part of a group show entitled Chesapeake Impressionists at The Palette and the Page gallery in
Elkton, MD.
My painting Marsh in Winter was selected for inclusion in the Maryland Federation of Art’s 2015 juried show American Landscapes. The show took place in the MFA’s Circle Gallery in Annapolis, MD from August 13 through September 13.
A solo exhibition entitled In Blazing Color: The Paintings of Robert Hofherr was held at Still Life Gallery in Ellicott City, MD from August 30 through October 10, 2015.
My painting Rites of Spring was accepted for inclusion in the Lancaster County (PA) Art Association’s national juried show for 2016, which was held through July, 2016.
In August 2018, six of my works were part of Vibrance, a multi-artist exhibition held by the Howard County Arts Association in Ellicott City, Maryland.