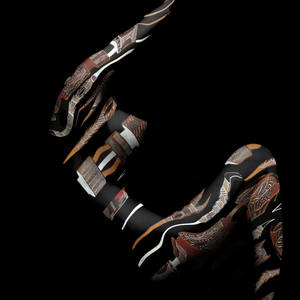 Entropy is conceptually defined as the measure of the level of disorder in a changing system. To quantify the state of equilibrium in a human beings state of mind or spiritual harmony relating to the deciphering of art and culture, each individual must be considered an a separate entity in an evolutionary changing system.
In isolation I am able to articulate and record the memories, the emotions, the complex visions absorbed by congruous interactions with people, culture and the earth. If this is the case, how can I truly believe my art indivualistic, one of a kind, unique? Is my work a process of continuous inner evolution and if so, can my creative spirit overcome the contaminated boundaries that threaten to poison the purity of future creations.
To be more prosaic, distinguishing ones art as factual offers a greater sense of sensibility compared to romanticising the fluidity of artistic evolution. Offering society a complex response to a polemic attack on conformity is destructive and counterproductive to one’s inner essence.
Do you challenge the omnipotent art critics and their contradictory interpretations that confuse and disconnect, an educated man just might, an uneducated man may attempt to articulate a dignified response but at what cost?
“My work challenges the myths of a culture frozen in time, in some idyllic pre-contact state. The visual narrative instigates confronting commentary on the ideology of an ancient culture evolving in contemporary society whilst the physical images conjure a conceptual environment in which primeval connotations are challenged. Indigenous culture has been compressed and categorised with the advancement of civilisation and with that a prescriptive view that isolates, divides and perpetuates the myth of what a ‘real’ Aborigine is”.
“A library of contradictory, spiritualised, ideological captures would best describe my work. Conscious of philosophising a prescribed cultural perspective, I leave it to my peers to attribute meaning allowing me to engage in coherent discussion that demands existential debate. Validating a feeling, a spiritual connection to a digital file is absurd and polarising, it challenges the very essence of cultural embodiment”.
Wayne Quilliam
www.aboriginal.photography
www.waynequilliam.com

A.Professor Wayne Quilliam is one of Australia’s pre-eminent Indigenous photographic artists, curators and cultural advisers working on the international scene. His award winning career includes the coveted NAIDOC Indigenous Artist of the Year, AIMSC Business of the Year, Human Rights Media Award and the prestigious Walkley Award for photojournalism including being nominated as a Master of Photography by National Geographic. A recent finalist in the invitation only PrixPictet in Paris and received a highly commended award in the Bowness Art Award.
He has created and curated over 140 exhibitions throughout the world and been published in more than 1000 magazines, books and newspapers. When not at home with his wife and daughter he is found in communities throughout the country sharing his knowledge and teaching youth the expression of culture through the lens. He is currently writing three children’s books, producing a coffee table book and developing a stage show bringing together Indigenous food, art and music.
His work includes documenting significant Indigenous events over the past 20 years including the Apology, 1967 Referendum anniversary, Garma, Laura, Burunga, Dreaming and Yeperenye festivals and thousands of community events throughout the country. Wayne works with Indigenous groups in Cuba, Mexico, Bolivia, Vietnam, Laos, Cambodia, Indonesia and Guam developing intercultural art and cultural exchanges with the vision of creating global exhibitions.
Wayne’s practical working knowledge of Indigenous issues throughout the country is highly valued and sought after by International corporations including Federal, State and Local government. He runs photographic workshops in remote, rural and urban communities and lectures at Universities, Secondary and Primary educational facilities in Australia and overseas.
In harmony with his photojournalistic work he is recognised as one of the country’s top artists for his diverse art practices including the ‘Lowanna’ series that infuses textures of earth onto the human form, ‘Towindri’ landscape art and ‘Smoke’ exhibition exploring the cultural significance of smoking ceremonies. It is estimated his photographic exhibition of the ‘Apology’, ‘Sorry more than a Word’ that opened at Parliament House in Canberra has been experienced by more than a quarter of a million people and continues to attract large audiences as it travels the world.
Over the past twelve months he has held solo exhibitions in Havana, Tokyo, Mexico City, Caracas, New York and Los Angeles, Berlin, Sydney, Melbourne, Adelaide, Perth and featured at the United Nations, New York. In 2013 he was the featured artist at G’Day LA where his art was seen by more than 20 million people on USA television, he then opened a solo show in New York.
These shows continue his international success’s from the Museum of Young Art, Vienna, several galleries in Berlin/Cologne/Dusseldorf/Hamburg as well as Russia, Guam, Indonesia and numerous galleries in Australia. His ‘Towindri’ exhibition in Cairo attracted critical acclaim will tour Riyadh and Beirut in 2014.