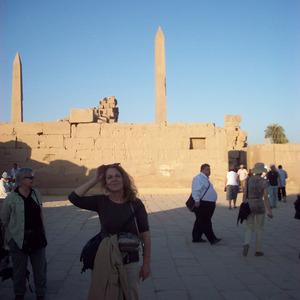 Born and lives in Thessaloniki, where he studied mathematics and design. He worked for 17 years in the Middle Public School as Professor of Mathematics-Environmental Education in Greece. From 2001 - 2013 has made seven solo exhibitions «TRASH-TRACEART» concept art with a three-science-ecology. He has participated in group art exhibitions and conferences of the Mathematical Society of the Greek Physics. From 2009 a member of the Chamber of Fine Arts.

2013- Thessaloniki NEW VOLUME WORK (Collective work. What does the viewer to say?)
DIMENSIONS: Υ 150cm-65cm- Μικτή τεχνική/Mixed Media
“One image 75 titles, 75 works of art
Or “What does the viewer want to say?” “A work of art of new volume” It is a collective work.
Anyone wishing to participate in this procedure gave a title to the image of the work(photo, the car belongs to the artist George Tzinoudi)and all created a collective work of art of new volume. The method used for the selection of viewers-potential artists who participate are based on the theory of stratified randomness.(Mathematics). Here are the titles and names of those who were present.