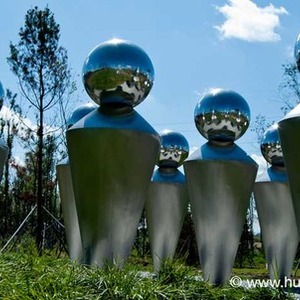 Husam Chaya is Lebanese born Canadian artist and has lived in UAE since the early 2005. He moved to Paris in 2009. Chaya studied at the Institute of Fine Arts; Beirut and at the EDH GROUP - Icart; Paris. Chaya spends his time between Montreal, Paris, Beirut and Dubai - Abu Dhabi.

Over the past 10 years he has exhibited extensively in Beirut, Dubai, Abu Dhabi and was commissioned for sculptures for many cities over the world like Los Angeles, Michigan, Pinamar, Tunisia, Istanbul and Montreal.

Chaya was awarded the "Golden Award" from the French Embassy in 2003, the YDP Award; Lebanese sector, in recognition to his contributions to Public Art at the local and national levels, as an emerging artist. In 2003 his sculpture "Fusion" was selected for the building of United Nations Economic and Social Commission for Western Asia (ESCWA), in Beirut.

2003 - Golden Award from the French Embassy