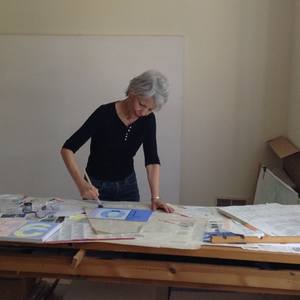 My name is Shamira Derakhshani Nicolas. I was born in Tehran, Iran. I spent the first sixteen years of my life in Tehran. A number of scholarships provided me with a high school diploma from USA, followed by a bachelor ad a master's degree from the American University of Beirut. From 1972 to 1977, I attended the Cleveland Institute of Art.

The strongest influence in my work remains from my early life in Iran: I was exposed to the most beautiful visuals and a culture that strove for spirituality in all facets of life. That spirituality culminated in my Sufi grandmother who graced this earth with her existence.

As a child, my strongest tool for learning was my eyes. I loved looking at shapes and colors. A wealth o pure forms and colors existed in the magnificent Persian carpets. The simplicity, purity, abstraction and immense variety of forms and colors in the carpets representing different regions of Iran etched a permanent mark in my mind. I loved looking at the Persian miniatures. Beautiful and simple forms in breath taking colors, tug at my heart, even to this day. Finally two colors, two blues, the turquoise color of the domes of many mosques next to the magnificent ultramarine blue of the evening sky in Tehran were extremely calming and beautiful. I remember looking at the two blues juxtaposed and feel a serenity I had never known before and since. The two blues are almost always in my work, whether the work is sad or happy.

On August 20, I will be giving an educational talk about one of my pieces, "961" for the benefit of the deaf community of Rochester, NY. It will be held at the NTID, Dyer Art Center, at RIT.

“The Light of Universe,” and “Secret to our Universe”, have been on line since 1998. www.shamiranicolas.com

I received a formal invitation to participate in the Florence Biennale, December 2011. Unfortunately, I had to decline it.

Andrews Art Museum, Andrews North Carolina. As the featured artist of the month, Four of my paintings were selected and exhibited in their fall show, September 4-October4, 2010.

75th Annual National Juried Exhibition at the Cooperstown, N.Y. July 16-August 20, 2010. Won the Dorothy Bostwick Campbell prize, for whom the year’s exhibition was dedicated to, two of my entries.

Watch A Video About shamira nicolas