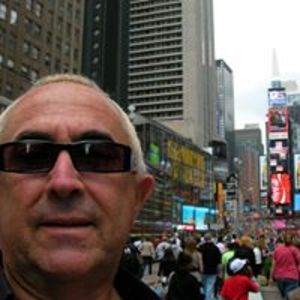 Drawing all night from his earliest memories Yianni was and still is addicted to art. In some cases he has referred to art, as, important to him as oxygen, without it he can’t survive.

Yianni is a self-taught artist who started exhibiting his work in public in 1985. In 1991 had his first solo exhibition in Sydney where he was involved with at the time, a very progressive art movement called, ‘Art in Public Spaces.’ In 1998 Yianni hosted his own Solo Exhibition on the Central Coast where he lived at the time.

In 2002 Yianni made the front page of his local paper after being selected to sit for an Archibald Prize by the award-winning artist Peter Smeeth. This article brought him to the attention of local businessman Cedric Millner. Out of that meeting a new gallery was born in the heart of Wyong. The Grand Gallery shared a space with a Bottle shop at the back of the Grand Hotel a perfect venue for an art gallery. The charter of the Grand Gallery was, “Bringing Art Back to the People.”

Grand Gallery went on to become the center for contemporary art on the Central Coast attracting hundreds of art lovers to its many themed openings and artistic happenings.

Out of the Grand Gallery the Zooid Art Movement was born with many high profile art stunts, invented and coordinated by Yianni, like moving art exhibitions through the streets of Sydney and the Zooids own portrait exhibition on the stairs of the Art Gallery of NSW getting them media coverage in nearly every paper and TV network in the country.

In 2007 Yianni founded the Super Art Project where he took over an ailing Supa Centa in Tuggerah NSW, at its peak Yianni was curating 24 studio galleries housing 64 Artists in all genres. There were over a thousand guests at the official opening in 2008 of what Yianni says was one of the biggest bringing art back to the people events on the Coast.

In 2009 Yianni was invited to have a Solo Exhibition in Gallery Gora in Montreal during the comedy festival. While there he met an art agent who got him an Exhibition in Chelsea in New York in May 2010. Yianni has a degree in Fine Art and Visual Culture Curtin University and has a Masters Degree Arts (Writing) from Swinburne University Melbourne.

Yianni has exhibited regularly since 1985 featuring in over 80 exhibitions. Yianni’s art is collected by corporate and private collectors worldwide.
In June 2012 Yianni had his art projected up in the billboards of Times Square in New York for an art project called "Art Takes Times Square" an estimated 500,000 people were in attendance at the event.

From 2004 to 2013 Yianni was presenter and arts reporter for his weekly radio show called Smart Arts on 92.5 ABC Central Coast.

In 2014 Yianni spent two months on an Artist Residency in Beijing in China representing Australia in the Arts in Beijing and attending official functions in the Australian Embassy.

Nowadays Yianni is a full-time artist and he breaks that up with his role as a casual Content Maker and Producer with ABC Local radio in Wagga Wagga. Yianni moved to the Riverina in 2018 with his family, his wife Kristen and son Jarrod and quickly made his mark on his new hometown of Ardlethan where he has his home and studio.

In May 2018 the town had their Artist in Residence Yianni Johns on display with over 70 paintings hung in the memorial hall. In 2019 Yianni Curated the Inaugural Ardlethan Art Prize hanging over 140 paintings in the same hall.

Yianni was invited to be featured artist in The Other Art Fair sponsored by Saatchi held in The Facility Melbourne in 2018 and Barangaroo in October 2019. You can see more of Yianni’s art at www.yianniartist.com.

EXHIBITIONS:
2020
Opened my own commercial gallery in Temora Australia.