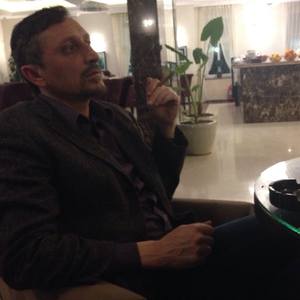 Goran Knežević was born in Vrbas in 1973. He graduated from the Academy of Arts in Novi Sad in 1997, under the mentorship of the Professor Slobodan Knežević Abi. He earned his Magister degree in February 2005 at the Graphics Department.

From 1998 to 2003 he worked as an assistant for the subject Drawing with Technology. He worked at the Academy of Arts in Novi Sad. From 2003 to 2010 he produced work as a freelance artist. Since 2010 he has been employed at the Academy of Fine Arts at the University of East Sarajevo.

So far he has had 20 solo exhibitions and has been awarded several times for his work as an artist.

Repeatedly participated on art colonies at home and abroad, the last time participated in the painting colony in Hungary (Budakalászt)